Deep State Trying to Get Rid of Netanyahu by Hook or by Crook, But Will Fail, Israeli Observers Say 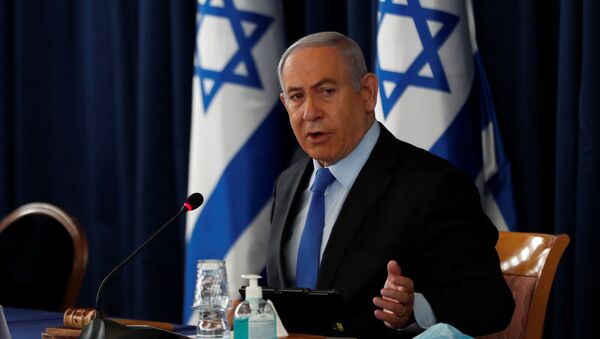 Ekaterina Blinova
All materialsWrite to the author
Benjamin Netanyahu's political antagonists have instrumentalised a whole set of tools to unseat the prime minister, including "anti-corruption" protests and banning him from receiving aid to pay for legal services during the trial, say Israeli observers, discussing whether the politician will manage to withstand the pressure.

The second hearing in Prime Minister Benjamin Netanyahu’s trial on charges of fraud, breach of trust, and accepting bribes is due to take place in the Jerusalem District Court on 19 July. The trial, which opened on 24 May, is the first one of its kind against a sitting Israeli official. According to the country's law, a prime minister charged with a crime is not required to resign.

"Like the first session, this will be basically a formal meeting, the defendant's lawyers will be allowed to make a statement about the materials received from the prosecutor's office", elaborates Israeli author, publicist, and blogger Yuri Moor. "The lawyers are expected to declare that the folders handed over to them contain not all documents, not all interrogation protocols, not all testimonies, not all evidence revealed by the investigation; citing a huge amount of material, lawyers will seek to study them for as long as possible".

Although the next few sessions will be "formal", they are likely to have a huge impact on the political atmosphere in the country, the publicist foresees. According to him, Netanyahu's political opponents are trying to take advantage of every such hearing "to stir up hysteria". Besides this, they are attending rallies organised on other occasions – for example, those concerning small businesses issues amid the pandemic – and vocally demanding that the prime minister resign, the blogger observes.

On Tuesday, Israeli protesters took to the streets of Jerusalem, chanting "shame, shame" and "Bibi, go home", according to The Times of Israel. For its part, Nir Hasson of Haaretz alleged that Tuesday’s demonstration "was a turning point in the evolution of protests against Netanyahu", recognising the growing number of youths among the demonstrators. As the anti-Netanyahu protest turned violent, the police stepped in and arrested some 50 individuals. On Friday, hundreds of Israeli protesters demonstrated outside Netanyahu's official residence in Jerusalem.

According to Moor, the abrupt upsurge of discontent over Netanyahu's alleged "corruption" appears odd, as the country's population has been aware of the charges for years and nevertheless voted for the prime minister and his party three elections in a row. The author is inclined to think that the prime minister's opponents are trying to use the public frustration over the coronavirus pandemic and instrumentalise the protest movement to unseat Netanyahu.

"Netanyahu's supporters, who judging from the last polls constitute a very large part of the population, are less active", the publicist remarks. "They plan to hold a rally outside the courthouse on Sunday morning, when the hearing begins, to express their outrage at what they believe are trumped-up cases".

Israeli society is growing increasingly polarised, with one side believing that Netanyahu is being chased by the old established elites who have weaponised the Israeli court system against the prime minister, while the other claims that Bibi is a corrupt politician who "stole" Israeli democracy, notes Nelly Gutina, an Israeli author and political commentator.

"The forces behind the protests against Netanyahu are the same forces that he opposed from the very beginning of his political career", she presumes. "These are the old elites which, as a result of demographic and social changes in the structure of the Israeli society, are trying to maintain their positions in the academy, the legal system and the media to compensate for the weakening of their positions in the political sphere itself". 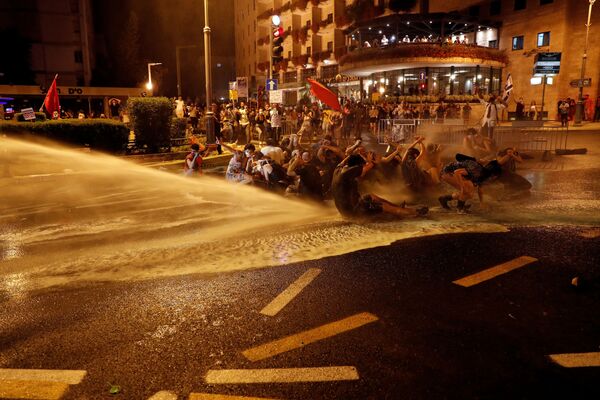 Pressure Mounting Against PM is Mobilising His Supporters

The situation is complicated by the fact that the court proceedings with regard to Netanyahu's cases are likely to take years, the observers point out.

Netanyahu's conviction is by no means a done deal, as legal experts and political scientists express doubt that the existing cases against the prime minister are "a first degree felony", Gutina remarks, referring to a Haaretz interview with Yehezkel Dror, a prominent Israeli scholar and international adviser on grand strategies.

The major question, however, is not so much what the upcoming verdict will be, but rather whether Netanyahu will be able to withstand the pressure from his opponents, deems Moor.

Thus, the prime minister was recently forbidden by Israeli Attorney General Avichai Mandelblit from receiving donations to fund his legal team. Mandelblit stated that a $2.9 million donation from American businessman Spencer Partrich to Netanyahu was tantamount to an "illicit gift". As a result, Micha Fettman, one of Netanyahu's top defence lawyers, was forced to quit over unpaid fees days before the second hearing.

"Many believe that the government's legal adviser and Attorney General Avichai Mandelblit does not allow Netanyahu to borrow large sums of money to pay for his defence, fearing that the premier will be able to hire highly experienced lawyers who will easily refute the prosecution's arguments in court", Moor opines.

In fact, one of the supposed motivations behind the ruling is to either financially bankrupt Netanyahu or to force him to leave office, the publicist suggests, citing the prime minister's opponents as saying: "If he wants to pay for his defence, let him mortgage the house" and "If he wants to borrow money for lawyers, let him leave politics".

In addition to this, Netanyahu was banned from naming police and judicial officials during his corruption trial. Following Mandelblit's decision, the prime minister openly accused the attorney general of scheming to oust him.

Both the recent wave of violent "anti-corruption" protests and attempts to limit Netanyahu's abilities to defend himself in court reflect the Israeli "deep state's" frustration over its obvious inability to topple him, according to Nelly Gutina.

"All legal measures, such as depriving Netanyahu of the rights and powers, which he and his predecessors enjoyed before, appear to be tricks directed personally against the prime minister which is further antagonising and mobilising his supporters", the political commentator emphasises.