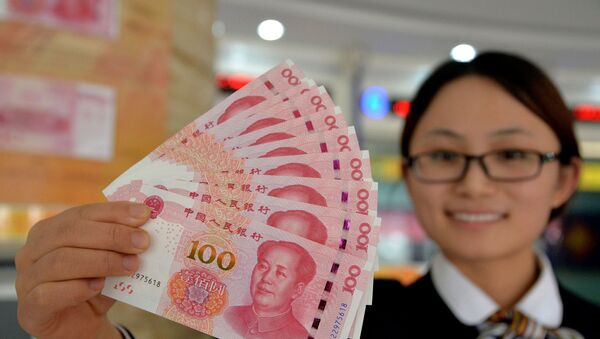 © AFP 2021 / STR
Subscribe
Chinese exports and imports grew in June more than projected. According to the data published by the National Bureau of Statistics of China, exports grew by 0.5% compared to the same period last year, while imports increased by 2.7%. These positive dynamics reflect that China is recovering from the crisis faster than expected.

This is the first time since the coronavirus outbreak when both China's exports and imports have started to grow. Most analysts expected that June would remain a month of recession: imports would drop by 10% and exports by 1.5%.

However, fiscal stimulus measures, as well as investments in infrastructure and real estate, yielded quick results.

Demand for imported rolled steel reached its peak for the last 33 months – it grew by 9.6%. Imports of crude oil also reached maximum values, climbing 9.9%. Here the demand was also spurred by Chinese oil refiners, who sought to fill their storage facilities while the oil price was low.

As a result, imports from some countries into the PRC increased at a double-digit rate. For example, June imports from the US to China increased by 11.3%, although in May this figure was in the negative zone.

Despite the pessimistic statements of some US politicians regarding the trade agreement, Chinese companies tried their best to fulfil the terms of the deal between the two countries that was concluded in January.

On the one hand, the easing of restrictive measures in response to the epidemic abroad contributed to the growth of exports. Many countries have begun to gradually open up their economies and resume business activities.

At the same time, increasing global demand for protective masks, gloves and other medical products and technological equipment also contributed to the increase in Chinese exports.

According to Chinese statistics, China's exports of medicines and pharmaceuticals increased by 23.6% in the second quarter. The sales of medical equipment to other countries soared by 46.4%.

Furthermore, 3.6 trillion yuan will be invested in the real sector, including in digital infrastructure, through the issuance of special government bonds as well as local government special-purpose bonds.

Finally, through various fiscal exemptions, as well as increasing the budget deficit to 3.6% of GDP, companies will attain an additional 3.3 trillion yuan of liquidity, which can also be used to restore business activities.

On the whole, China successfully coped with the first wave of the epidemic and was able to minimise economic losses, Jia Jinjing, assistant dean of the Chongyang Institute for Financial Studies at the Renmin University of China, told Sputnik.

“China has effectively coped with the first wave of the epidemic now. It has managed to minimise the impact on the economy. Judging by domestic and foreign demand, we see that the measures are yielding results. However, the epidemiological situation remains uncertain, especially in some countries, including the US. Where the epidemic is likely to spread, the situation is very difficult to predict,” he said.

Despite the fact that China may have been able to minimise the impact of the epidemic for itself, due to China's involvement in the global value chain, the country is highly dependent on the situation in the world economy. At the same time, the US, as the expert notes, remains the main hidden threat to the global economy and finance.

“In terms of the financial or macro-level, the greatest latent risk comes from the US. The US has adopted a financial support programme that ends this month. It has not yet been announced what the next steps will be. But there are serious financial risks in the current situation that come from the US. In June, US federal revenues accounted for only one-fifth of expenditures. This means that the US will face problems servicing its own debt in the future. As debt accumulates, the US is becoming a zombie country, and this is a real danger for the global economy,” Jia Jinjing stressed.

The US has allocated $2.3 trillion to fight the current crisis, a record package of incentives. However, these anti-crisis measures are mainly limited to direct financial stimulation of the economy.

At the beginning of March, the Fed lowered the rates to zero and started implementing a policy of quantitative easing – this method was already practised during the 2008 crisis.

The quantitative easing – based on the lowest interest rates possible – is designed to sharply increase lending and, consequently, business activity and output growth. In reality, however, it turned out that cheap credit has led only to the expansion of the financial sector and speculative growth in the securities market.

From 2009 to 2019, the S&P 500 index grew by 370%. During the same period, GDP grew by less than 50%. The real sector, which supposedly provides most of the employment in most countries, was left behind, as evidenced by the accumulated structural problems in the American economy and society, such as high unemployment and growing social inequality.

China Stocks Tumble on Spiking Sino-US Tension, Lingering Economic Uncertainty Triggered by COVID-19
China has taken into account the mistakes of the past, so the current measures taken by the Chinese authorities are aimed at maintaining the real sector. The practice has shown that huge financial incentives lead to economic imbalances and bubbles.

In fact, China's campaign against leverage, not completed so far, is precisely aimed at fighting the consequences of pumping the economy with financial doping in 2008.

But in today's situation countries can only jointly stabilise the global financial system and come out of the crisis caused by the pandemic with the least losses.

000000
Popular comments
Like China or not, the world is experiencing first hand the differences between China and the US..US talks and threatens and constantly breaks promises and contracts while China acts with positive deeds that truly mean something and keeps their word.