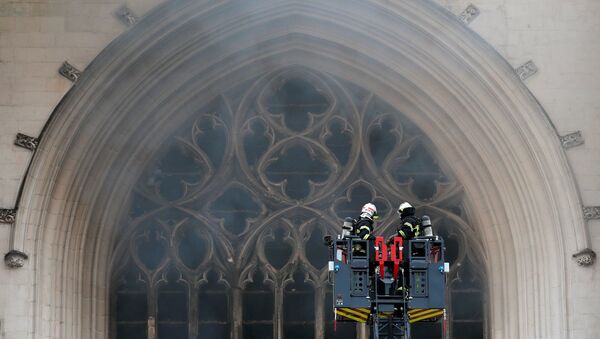 A major fire has taken place at the Nantes Cathedral, or the Cathedral of St. Peter and St. Paul of Nantes, with the local fire service confirming the blaze.

The emergency services promptly arrived on site, with 104 firefighters and 45 fire engines working at the scene. The blaze was contained after serious efforts, according to the fire department.

In the wake of the fire, the Nantes Prosecutor’s Office has opened an arson case. According to the Ouest-France outlet, there were several sources of ignition in the church.

French President Emmanuel Macron has expressed his support for the firefighters.

"After Notre-Dame, the Cathedral of St. Peter and St. Paul of Nantes, in the heart of Nantes, is in flames. I support our firefighters who take all the risks to save this Gothic gem in the city of the Dukes", he said on Twitter.

​Netizens have shared numerous photos and videos depicting black fumes pouring from a window between the cathedral’s two towers.

Notre Dame, a medieval Catholic cathedral in Paris caught fire on 15 April 2019, causing the collapse of the building's spire and the partial destruction of its roof. The incident might have been caused by the reconstruction works going on at one of the greatest examples of French Gothic architecture.

The fire damaged some of the church’s relics, prompting a stream of donation pledges worth 850 million euros ($953 million).

The last fire to have affected Nantes’ Cathedral of St. Peter and St. Paul was in 1972. It ravaged the roof and resulted in a three-year closure.

Since 1862, the Nantes Cathedral has been listed as a historic monument by the French Ministry of Culture. The cathedral is constructed in the Gothic architectural tradition and the building, considered to be one of the great products of the Renaissance, is lit by a 25-metre glass dome created by cantonal master-builder François Chapuis dedicated to the saints of Brittany.