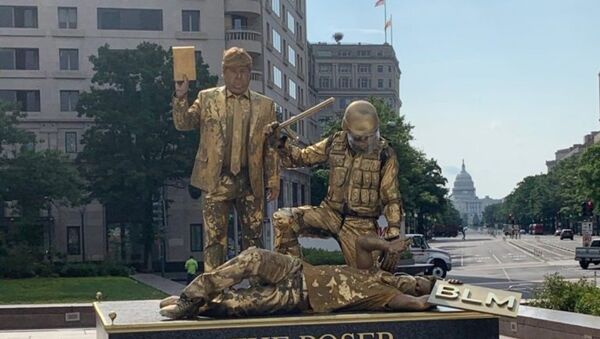 Artists and actors summarized their view of US President Donald Trump’s political legacy during a Friday morning living statue performance that also commemorated the launch of a new artist-driven, anti-Trump initiative.

Pedestrians near the Freedom Plaza in Washington, DC, were able to catch a glimpse of the city’s newest presidential statue: “The Poser.”

Images of the living statue performance showed the US president proudly raising a Holy Bible in the background as an officer dressed in SWAT gear thrashes a Black Lives Matter protester.

Check out what my step bro Bryan Buckley put up today in Freedom Plaza https://t.co/sLuiaQCX3f pic.twitter.com/z9CI88KNbZ

The performers’ stage labeled Trump as a “Destroyer of Civil Rights and Liberties” from 2016 to 2020 - hinting at a loss to former Vice President and Democratic presidential nominee Joe Biden in the upcoming presidential election.

“Today marks the official launch of the Trump Statue Initiative (TSI), a way for artists to share their point of view on our 45th President’s legacy in a way he can truly relate to: through realistic ‘heroic’ statues highlighting the self-serving, narcissistic and racist moments that have notoriously defined his presidency,” a TSI statement obtained by PoPville read.

“Organized by two time Academy nominated writer and director Bryan Buckley, this installation interprets how future generations might remember Donald Trump’s legacy in response to the defining moments of his presidency, and encourages others to get involved.”

Trump is certainly no stranger to having his image and mannerisms mocked, but this particular depiction of 45 as a statue appears to act as a counter to the president’s recent backing of post-Civil War Confederate monuments, the General Andrew Jackson statue in President’s Park and other controversial figures.

While millions of people were marching against police brutality and racism in the US, Trump threw his support behind police unions and spouted uncouth comments about George Floyd.

However, when it came time to address controversial monuments across the US, Trump quickly signed an executive order in support of the inanimate figures.

The phony Trump’s posing with the holy text on Friday was a callback to the actual US president’s puzzling photoshoot in front of St. John's Episcopal Church on June 1.

Jokes and laughs at Trump’s expense on that occasion were short-lived, however, as it was revealed soon after that US Park Police officers acting on orders from the Trump administration had cleared a path for the president by gassing and forcefully removing peaceful protesters from Lafayette Park.