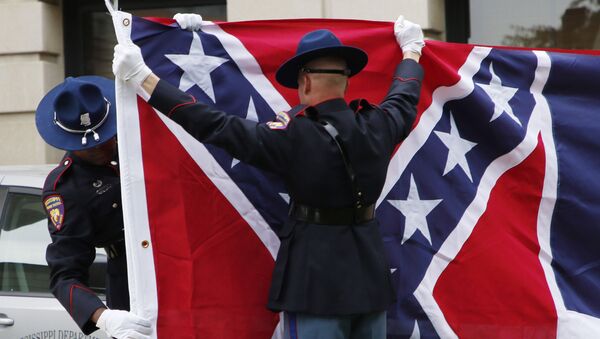 © AP Photo / Rogelio V. Solis
Subscribe
Some US military services have already barred public display of the flag over concerns that it inflames racial tension and damages unit cohesion. A military-wide policy is still in the works, and is likely to draw ire of President Donald Trump, who has defended the display of Confederate symbols amid protests from racial justice activists.

The US Defence Department is considering a new policy on displaying flags at military facilities that would ban the use of the Confederate flag without actually singling out its name, The Associated Press reports, citing US officials.

The officials said that the plan, which has yet to be finalised, would list the types of acceptable flags that may be displayed at military installations. The Confederate battle flag would not be mentioned among them.

The apparent idea is to prohibit its display while avoiding confrontation with President Donald Trump, who has vehemently rejected the removal of Confederate symbols from public view.

CNN reported on 6 July that the Pentagon had already drafted a policy document to ban the Confederate flag from being displayed at military bases. It had yet to be formally approved and undergo military legal personnel review, according to the report.

Ryan McCarthy, the army’s senior civilian official, said on Thursday that he is still working out new guidelines that would ban any sort of “divisive symbols” from military bases. Asked if that would specifically include Confederate flags, McCarthy replied: “We would have any divisive symbols on a no-fly list, if you will.”

Racial justice activists have been tearing down statues of Confederate generals and even went after several dedicated to slave-holding US presidents such as George Washington and Andrew Jackson.

The public debate also concerned the display of the Confederate flag, with the state of Mississippi redesigning its flag to remove the Confederate battle emblem from it. NASCAR has also banned the divisive flag from its races.

Some parts of the US military, including the Marine Corps and commands in South Korea and Japan, have also removed the emblem from their installations. The Navy, Army and Air Force are all said to be working on similar bans.

Gen. Robert Abrams, the commander of all US forces in South Korea, noted in a July memo that the flag “has the power to inflame feelings of racial division. We cannot have that division among us”.

President Donald Trump, who relies heavily on white rural Southern voters, has staunchly defended flying the flag, saying that its display is covered by freedom of speech.

He also threatened this month to issue a veto over a crucial defence spending bill if it is amended to require the renaming of all ten US army bases named after Confederate leaders. The US House Armed Services Committee backed the amendment despite Trump’s objections.