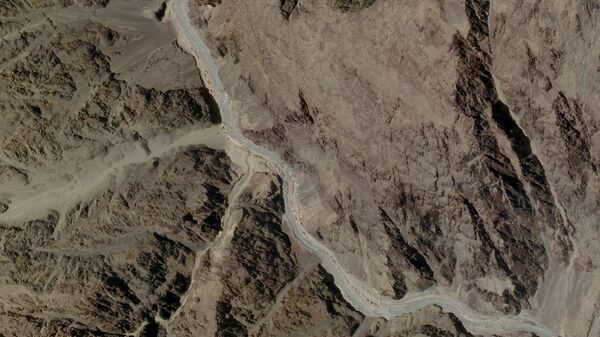 © REUTERS / PLANET LABS INC
Subscribe
International
India
Africa
New Delhi (Sputnik): The simmering border tensions between India and China escalated into direct clashes on 15 June in the east of the Ladakh region. Both countries are in the process of resolving the conflict through multiple dialogues. While disengagement has started at friction points, it has yet to take place in Pangong Tso and Depsang Valley.

After Indian Prime Minister Narendra Modi's visit surprise visit to Ladakh in the first week of July, India's Defence Minister Rajnath Singh has arrived on a two-day visit to the conflict-ridden region amid an ongoing negotiation between India and China to resolve border tensions.

Upon reaching the Stakna area of the Leh district in Ladakh, Rajanth, accompanied by Army chief General Manoj Mukund Naravane, attended an event that showcased the army's paradrop skills and other military exercises carried out by the Indian Armed Forces.

​The Defence Minister is also scheduled to visit the forward areas in the eastern Ladakh region and interact with the armed forces deployed in the region.

Leaving for Leh on a two day visit to Ladakh and Jammu-Kashmir. I shall be visiting the forward areas to review the situation at the borders and also interact with the Armed Forces personnel deployed in the region. Looking forward to it.

​The visit comes in the backdrop of intense negotiation between the two nuclear-armed countries to resolve the tensions at the border, where the talks have been stuck over disengagement in Depsang Valley, and Pangong lake - where China's People's Liberation Army has been camping in the Finger 4 region of Pangong Tso, an area traditionally under India's control.

However, sources in the Indian Army have pointed out that Chinese troops have moved 1.5 km away from their prior position in eastern Ladakh's Galwan Valley, where the deadly clashes between the two nations' troops took place, resulting in the death of 20 Indian soldiers. Casualties on the Chinese side haven't been revealed yet.

Recently, the countries engaged in a fourth round of disengagement talks, spanning over 15 hours on Tuesday.

While the Indian army said in a statement on Thursday that the process of de-escalation along the loosely demarcated Line of Actual Control requires "constant verification", the Chinese foreign ministry said that the two sides have made progress over disengagement in the western section.

However, speculations are rife that de-escalation at Depsang and Pangong Tso could require several more rounds of negotiation.

The physical clashes broke out between the two countries on 15 June after they accused each other of violation the 4,057-km LAC adjacent to the Ladakh region, the border that both the countries agreed to in 1993.