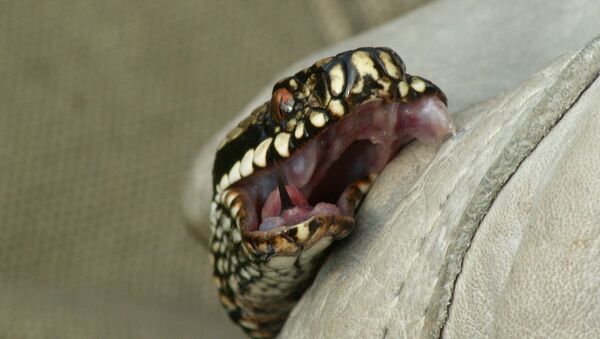 CC BY-SA 2.5 / Piet Spaans / Vipera berus male
Subscribe
International
India
Africa
New Delhi (Sputnik): While many people commemorated World Snake Day on 16 July by raising awareness and discussing the importance of venomous serpents in maintaining an ecological balance, a snake catcher team in India got a bit extravagant with the idea and partied with the venomous creatures.

A snake catching team in the Indian state of Jharkhand is getting blasted on Twitter for celebrating World Snake Day in an objectionable manner, force-feeding venomous reptiles a cake made to mark the occasion.

The video, which has gone viral on social media, shows a woman with a team of snake rescuers cutting a cake and even then offering it it to the reptiles while others applaud this act. She later says the reptiles showed respect to our gesture and ate the cake.

Twitter users are lambasting the snake catcher team over its insensitive approach. Several netizens said the snakes need to be "rescued" from the rescuers.

🤦🏻😡
Kindly let me know if you find more details. I will take this up PCCF(WL) Jharkhand. This is foolish and need to stop.#awareness

It's actually foolish and also worrying. Trying to find details...will surely share it with you....Thanks much.

I just hope that we find these "Rescuers" and rescue those snakes.

​World Snake Day is celebrated every year on 16 July to raise awareness about the species and discuss the vulnerabilities of the reptiles, as many snake species are on the verge of extinction. The reptiles face threats from illegal poaching, habitat destruction, disease, over-harvesting, and even climate change.