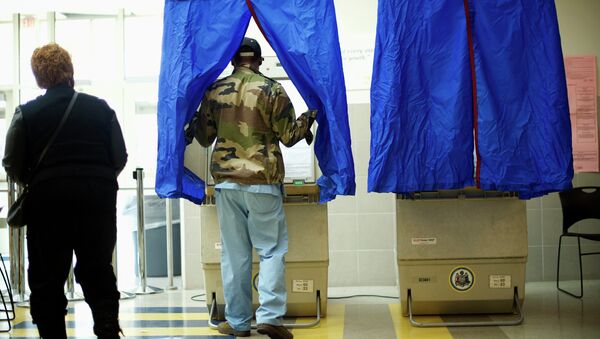 The gutting of a 2018 amendment in Florida that gave ex-felons the right to vote, is just the latest attack in the government’s war on poor, Black and brown people in America, two activists told Sputnik.

In 2018, Florida voters elected by a huge margin to pass Amendment 4, thus scrapping a Jim Crow-era law that barred former felons from participating in elections. However, when Rick DeSantis won the Florida governorship in that same election, the fight against that effort was given new steam.

The Republican-dominated legislature passed a new law requiring ex-felons to pay off all fines before being allowed to vote, and although a federal judge struck down the measure, an appeal by DeSantis’ administration saw the ruling reversed and the law subsequently upheld.

The American Civil Liberties Union has denounced the new law as a “poll tax,” noting it is in violation of the 24th and 14th Amendments to the US Constitution, which bar poll taxes and wealth discrimination in voting, respectively.

On Thursday, the US Supreme Court declined to review the Appeals Court’s decision, in effect validating the gutting of Amendment 4.

Ruth Beltran, an organizer with Black Lives Matter Tampa, and Kofi Ademola, an activist and organizer with the Black Lives Matter movement in Chicago, told Radio Sputnik’s Loud and Clear on Friday that the new measure was an attack on poor Black and brown people that built upon the momentum of disenfranchisement from the era of Jim Crow and formal racial segregation in America.

“The voters in Florida supported this decision. Sixty-seven percent voted in favor of that, and it's very disappointing to see the government now come down and basically infringe into the voting rights of so many people.”

However, Beltran said the timing of the decision was important as well, as it comes just days before the July 20 registration deadline for upcoming primaries. “This decision will have a big impact in Florida elections this year,” she said.

‘It’s a historical continuum, voter suppression and disenfranchisement,” Ademola told Sputnik. “It’s clearly targeted at Black and brown communities; it’s clearly targeted to make sure that folks aren’t included. We always say that the prison-industrial complex is the new slavery.”

“So when you think about the foundation of this colonial state, initially it was white men who owned property that had exclusive rights. So until we had the suffrage movement, until we had the civil rights movement, you didn’t see anyone else having the ability to participate in the so-called democratic process. So it is no surprise, during this unique time that we live in, that we’re now seeing this again.”

“I’m a felon. I caught a felony when I was 17 years old, and my first time voting was in 2018 because I was under the impression I couldn’t vote as a felon in Illinois,” Ademola said. “I was mistakenly wrong, but I didn’t have access to that information. So, thanks to organizations here in Chicago like Chicago Votes, which goes into the Cook County jails - this was pre-COVID - and registers people to vote and actually got people to vote there, you know, we saw an uptick in folks sort of being pushed out of the conversation being able to vote.”

“So what’s happening in Florida is a disaster. We saw voter suppression happen back when [former US President George W.] Bush was elected, voter suppression happened in the 2016 election, and then we see it all the time on the local level in Florida. So this is just a continuation of trying to make sure that they are in power and continue to marginalize people,” Ademola said.

“The government in Florida wants to exclude those people regardless of what the majority of the people voted for back in 2018,” Beltran said. “It’s really a continuation of the war on poor people who have no money to pay fines, given that in this country, most people are already not paid a living wage, which makes it nearly impossible for those with felonies to reintegrate into society.”

“It also speaks to the government’s intention to have people continue to go back into the criminal justice system and into the jails just for being poor. You are not able to pay a fine or fees even when you are on probation or parole; we know that that almost always can cause it to be a violation of your parole. It’s just a war on poor people. It’s very unfair, but it does speak loudly to the intention of our government: that it is to exclude people, the intention is to disenfranchise voters so that only a handful of people have the power to make decisions in our country. It also speaks to the intention of making it almost impossible for people to reintegrate back into society after they have been part of the criminal justice system.”

“And it speaks to the intention that this facade of freedom and liberty that we speak to in the United States, it’s really that, it’s a front. It doesn’t go deep enough into our society, so it’s not a reality. It’s just a front to give the impression that we have freedom and liberty, but in reality, voters in Florida voted for this amendment and now the courts have found a way to void their vote altogether and continue to criminalize, continue the war on poor people who should be given the opportunity to reintegrate back into society, to participate fully in all aspects of society.”

Ademola said the key to pushing for total reintegration for formerly incarcerated persons was to expand the struggle outside the legal system and to link up with other struggles, such as for a public health policy for the people during the COVID-19 pandemic.

“We hope on a political level that some progress gets made, but ultimately with so many folks dying, especially in Florida, and their governor being so negligent, to me, these people are human rights criminals,” Ademola said. “They are violating human rights, and they should be treated as such. They are literally committing genocide in my opinion, and if we don’t view it like that and we don’t approach it like that, mass-mobilize around that, then we will continue to be disappointed by a system that has historically exploited and oppressed us, not valued our lives. This is just one of many examples of our continued exploitation and disenfranchisement, and it is disgusting.”