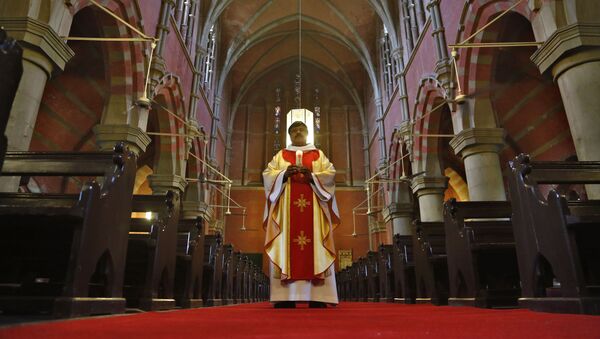 New Delhi (Sputnik): From scandalous abductions and later forced marriages of Catholic, Hindu, Sikh girls to vandalisation of church and temples, Pakistan has long been accused of mistreating minorities. The Human Rights Commission of Pakistan (HRCP) recently released a report citing the sufferings of minorities due to forced conversion to Islam.

A church in the village of Baloki in Pakistan has allegedly been forced to remove the cross from its premises by local Muslims in the area.

According to social media posts across Twitter, the cross was recently fixed on the under-construction church but it was removed after local Muslims issued threats to the Christian community in Baloki, a village located over 64 km (40 miles) from Lahore in in Punjab province.

The Christian community alleged that local Muslims had threatened to ban prayer services and confiscate their church's property.

“The Muslims [demanded] we remove the cross and all three floors of the minarets,” Barnabu a resident of Baloki was quoted by the website International Christian Concern (ICC) as stating.

Christians in Pakistan were forced to remove a Cross from a Church which was under construction in a village near Baloki, Lahore.

Radicals threatened them that if they don't obey, they will seize the Church property.

Intolerance towards minorities is a normal affair in #Pakistan! pic.twitter.com/22zAcCh9II

“Therefore, we had to obey them. Now, the building does not look like a church. It’s just a room and therefore we are sad,” he said, adding that they took the decision to remove the bells for the safety and protection of Christians in the village.

“We agreed to the demands with broken hearts,” the church's Pastor Ilyas said.

In May, a church was vandalised by a group of armed men over a land dispute in Pakistan's Punjab province. It was a church in Kalashah Kaku village, 40 km from Lahore.

According to Pakistani government statistics, religious minorities make up around 3.72 percent of the country's population.

Human rights groups, including the Human Rights Commission of Pakistan (HRCP) have accused Pakistan of oppressing its minorities.

On 10 July, a group of protesters gathered at UN Headquarters in Geneva during the 44th session of UN Human Rights Council to protest against the persecution faced by Hindus and Christians at the hands of the Islamic fundamentalists in Pakistan.