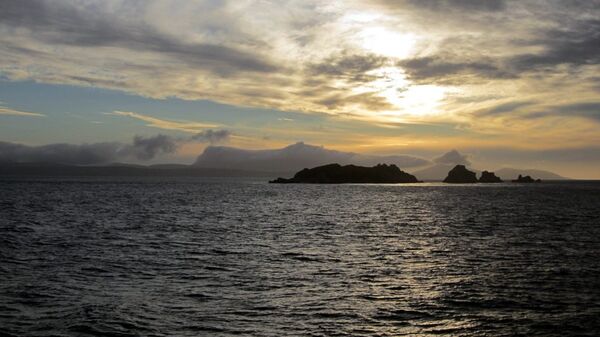 © Flickr / David Stanley
Subscribe
International
India
Africa
Argentina and the United Kingdom have long-held disputed claims over the sovereignty of the Falkland Islands or as they are called in Spanish - 'Islas Malvinas' - Buenos Aires has long stressed a return to negotiations to solve the clashing ownership.

"Argentina's government strongly repudiates military maneuvers in our illegitimately occupied territory. It is an unjustified show of force," Sola said.

He added that the international community "also rejects the military presence in the South Atlantic" and called the maneuvers "contrary to the region's policy" which calls for peaceful solutions to the dispute over sovereignty.

​Buenos Aires urged London not to continue its show of military force around the islands and to resume diplomatic negotiations over their ownership.

The patrol ship HMS Forth, the British Infantry Company A, the A400M aircraft, and the Royal Air Force's Typhoon 1435 Flight were all involved in the military exercises.

​Since the 19th century, Argentina and the UK have been in dispute over who holds jurisdiction over the Malvinas/Falklands Islands. In 1982, the two countries fought a war over the territory.

The conflict between then-President Leopoldo Galtieri with Prime Minister Margaret Thatcher, saw the deaths of 649 Argentines and 255 British soldiers died.

While the island is located just off of the coast of Argentina, the majority of those who lived there are British Citizens. In 2013, the islands held a referendum on the issue, Falkland islanders voted for the continuation of their status as an Overseas Territory of the United Kingdom in a near-unanimous verdict.