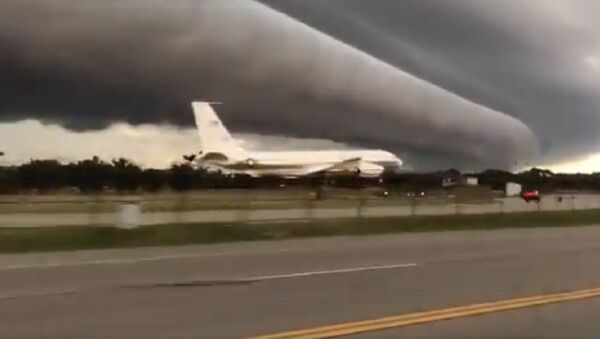 Western Kansas has been pounded by storms over the last several days, and while they didn't sweep any houses away to the land of Oz, they did manage to offer some breath-taking views.

A giant, grayish-black “shelf cloud”, was spotted by sky-gazers in Wichita, Kansas on Thursday morning, and photos and videos of the phenomenon were shared across the net. One of the videos of the sinister skies, apparently captured from a car, was provided to Weather Nation by a local witness, leaving netizens amazed and frightened at the same time.

​“It's like Armageddon!”, one person commented on the view.

That is indeed a line. 😬

As thunderstorms struck across western Kansas, other similar images of the cloud described by some viewers as “ominous” were shared across Twitter. Netizens were particularly awed by the sharpness of lines drawn by the weather.

The shelf cloud that came through NW Sedgwick County, KS this morning had some gorgeous lines. This was a mile south of my little shack on the prairie about 7 am.@KWCHRoss @NWSWichita #StormHour #kswx @spann pic.twitter.com/SRxox29PVm

Shelf clouds are a type of so-called arcus cloud formations which typically appear along thunderstorm outflows.