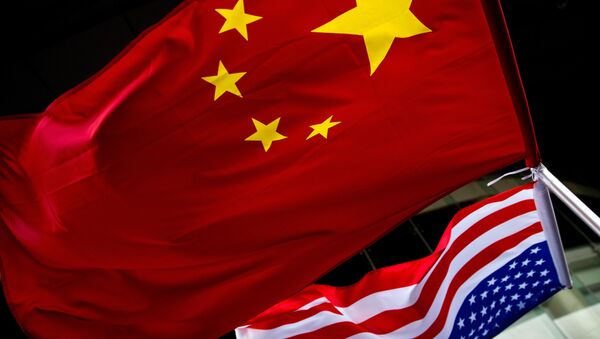 Ekaterina Blinova
All materialsWrite to the author
While ramping up pressure against Beijing on multiple fronts, Washington appears to not be taking into account China's sustainability and resilience, which stem from its sophisticated culture, says sociologist Dr. Heinz Dieterich, explaining why the US' current China strategy is erratic and doomed to failure.

On Monday, US Secretary of State Mike Pompeo announced that "most" of China's maritime claims in the South China Sea are null and void. The People's Republic claims up to 80% of the 3.5-million square kilometre sea, in accordance with the so-called "nine dash line".

"The world will not allow Beijing to treat the South China Sea as its maritime empire", Pompeo stated.

In response, the Chinese embassy in the US warned the Trump administration against "stirring up tension and inciting confrontation in the region."

Washington Stepping Up Pressure Against Beijing

The latest spat came on the heels of tit-for-tat sanctions against senior politicians implemented by Washington and then Beijing over Xinjiang as well as the US show of force in the South China Sea earlier this month. The Trump administration is continuing to tighten the screws on China's trade, high-tech sector, and artificial island building. According to public opinion polls, anti-China sentiment is now on the rise in the US, with about 66% of Americans thinking unfavourably about the People's Republic, prompting speculations about a forthcoming "cold war" with Beijing.

However, at the same time, the US Chamber of Commerce has recently demanded that top Chinese officials redouble efforts to implement phase one of the trade agreement which was concluded between Washington and Beijing in January 2020.

"Any scientifically sound metric of international standing – economic, scientific, demographic, political, military or Covid-19 – shows, that the US is in no condition to either win a 'cold' or 'hot war' against China", says Dr. Heinz Dieterich, director of the Centre for Transition Sciences (CTS) at the Autonomous Metropolitan University in Mexico City, and coordinator at the World Advanced Research Project (WARP).

Washington´s China strategy is erratic and being coupled with the internal partisan and social divide which has manifested as a systemic crisis in the US, he remarks.

The crisis is systemic, because it has affected political, economic, cultural and social dimensions. It dramatically evidenced the breakdown of the intra-elite consensus between Democrats and Republicans on how to preserve the global US domination-system. It has also aggravated longstanding social inequality, skyrocketing national debt and swirling protests, the professor notes. Besides endangering the country's internal stability, it threatens to affect the global balance of power and world peace, Dieterich warns.

The Demise of the Transatlantic Partnership

While the US is now praising the UK's decision to ban Chinese telecom equipment from its 5G networks, the Trump administration cannot boast good relations with the European Union, as it has largely alienated Germany, "the undisputed leader" of the bloc.

On 29 June, German Foreign Minister Heiko Maas warned that the current tensions between the US and Germany are unlikely to be solved in the foreseeable future, no matter who wins the November vote: "Everyone who thinks everything in the trans-Atlantic partnership will be as it once was with a Democratic president underestimates the structural changes," Maas told the German press agency DPA.

The Trump administration has repeatedly lambasted Berlin over NATO spending, migration and economic policies, as well as its participation in the Russia-led Nord Stream 2 gas pipeline project, which was recently subjected to US sanctions.

At the same time, the US open policy of intimidation against China, Russia, North Korea and Iran has proven ineffective and failed, according to the academic. Iran's delivery of about 1.5 million barrels of Iranian gasoline and related components to Venezuela, a country suffering from a US embargo, in May and June 2020, clearly indicated that Washington's policy of "maximum pressure" against nuclear or powerful states does not work. 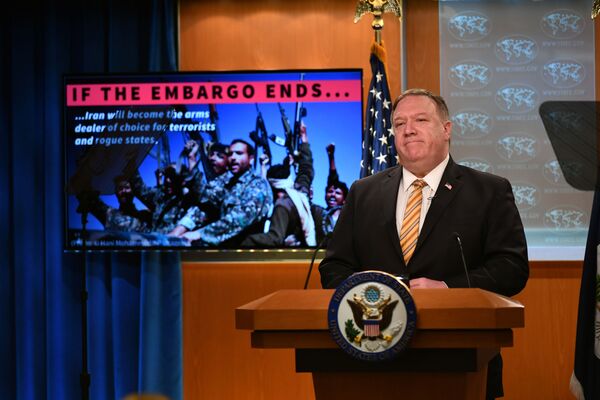 U.S. Secretary of State Mike Pompeo gives a news conference about dealings with China and Iran, and on the fight against the coronavirus disease (COVID-19) pandemic, in Washington, U.S., June 24, 2020
© REUTERS / POOL

Despite sabre-rattling and muscle flexing in the South China Sea, the US is unlikely to engage in a direct confrontation with the People's Republic as it is doomed to failure, according to Dieterich, who recollects that the US has de facto "lost" four wars in Asia: China's civil war (1946-49), the Korean War (1950-53), the Vietnam War (1955-75), and most recently in Afghanistan.

"My Center for Transition Sciences (CTS) has developed a multi-variable 'Geopolitical Index of Relative Power of Nation-States' (GIRP), which we presented in Moscow in 2014 that clearly shows that the US and its allies would have won a nuclear war against China in the 1950s. But, even against the lightly armed peasant army of Mao Zedong, they could not win the Korean War," the professor notes.

The US as a superpower is today only "a shadow of what it was after 1945", according to the academic, who claims that it has turned from a “tiger with nuclear teeth” (as Soviet leader Nikita Khrushchov defined it) into a “paper tiger” (as Mao Zedong called it).

Touching upon the massive pressure the US has exerted on China's economic, social and political spheres, as well as raising stakes in the South China Sea, Dieterich presumes that Washington underestimates China's resilience based on its sophisticated culture and "dialectical spirit of Confucius, Lao-Tse, and Gautama Buddha" which have many times helped the nation overcome dramatic historical challenges and paved the way to its socio-economic and political transformation.

He notes that if one takes a look at the past two centuries, one would see that the Chinese managed to fend of the Japanese intervention, survived the Civil War, and proved sufficient in the Korean and Vietnam wars. IT successfully underwent the Cultural Revolution under Mao Zedong and then further socio-cultural transformation under Deng Xiaoping. Currently, he says, Chinese society is making a dramatic technological leap striving to accomplish its Made in China 2025 strategic plan under Xi Jinping.

"These successes have produced an overwhelming support of the people for the government, a strong national unity behind a clear strategic leadership, based on the scientific principles of Marxism, and an international global power and standing in all important metrics," Dieterich says. 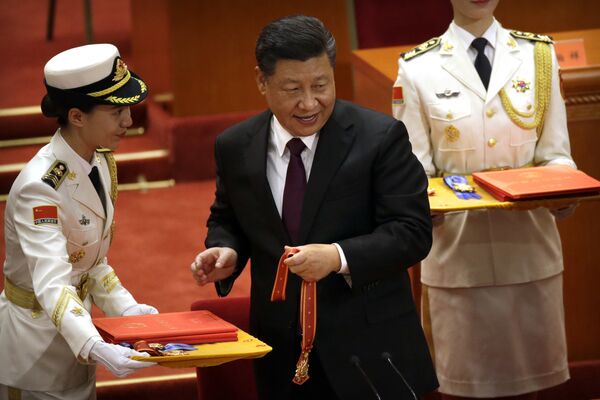 Chinese President Xi Jinping prepares to present a medallion during a conference to commemorate the 40th anniversary of China's Reform and Opening Up policy at the Great Hall of the People in Beijing, Tuesday, Dec. 18, 2018
© AP Photo / Mark Schiefelbein

The Chinese are not sitting on their thumbs while the US is trying to build an anti-China coalition; the People's Republic is actively forging multilateral alliances and strengthening ties with Russia and the Germany-led European Union.

Thus, Beijing is pushing ahead with the Regional Comprehensive Economic Partnership (RCEP), a proposed free trade agreement in the Indo-Pacific region, which brings together the Association of Southeast Asian Nations (ASEAN) and its FTA partners, namely, China, Australia, Japan, New Zealand, and South Korea. Furthermore, the People's Republic is signalling a "positive and open attitude" towards joining the Comprehensive and Progressive Agreement for Trans-Pacific Partnership (CPTPP), an "updated" version of the Obama-era Trans-Pacific Partnership (TPP) shredded by Donald Trump when he assumed the office.

To preserve the global balance of power, Washington should adhere to a symmetrical multi-polar world and give up plans of "subjugating China, Russia and Europe, in order to recuperate its former world supremacy", according to the professor. "Democracy and Justice in the world system are only possible between entities, which roughly have the same amount of power," he remarks.

"The only stable and viable solution for the species to survive is a new eco-civilisation, based on a global non-market economic system, in which the private tyranny of the market – a global plutocratic elite of profit mongers – and anti-democratic oligarchic political systems do no longer rule the destiny of the people," Dieterich concludes.