‘Poking Beehive with a Stick’: Turkey Seeks to Profit as Azeri-Armenian Fighting Intensifies 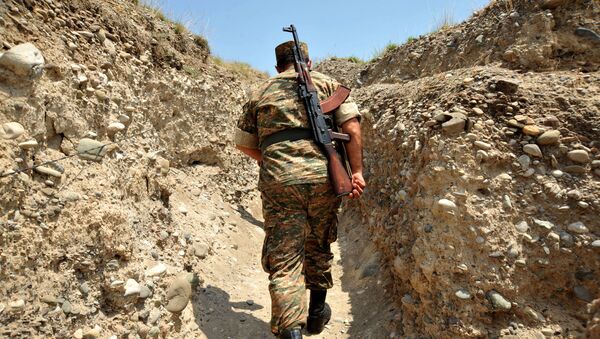 © AFP 2021 / KAREN MINASYAN
Subscribe
Fighting between Armenia and Azerbaijan continues for the fourth day over the disputed region of Nagorno-Karabakh. However, the fight is also of geopolitical importance for Turkey, which shares a border with Armenia while strongly backing Azerbaijan, Mark Sleboda, a foreign affairs and security analyst, told Sputnik.

Nagorno-Karabakh is “technically [part of] Azerbaijan, and it is generally recognized as part of Azerbaijan by the international community as a whole,” Sleboba told Loud & Clear host Brian Becker Wednesday. However, the region has an ethnically Armenian majority. For decades the exclave was of little concern, since both countries were republics of the Soviet Union, but when the USSR was dissolved in 1991, nationalist sentiments flared back up.

“There was a very nasty war there as the Soviet Union fell apart; there were some at least 30,000 dead on both sides, including civilians, and ethnic cleansing and neighbor killing neighbor were very much a part of it. And a ceasefire officially ended the fighting in 1994, and this was administered by the OSCE [Organization for Security and Co-operation in Europe], the Minsk Group, of which the US and Russia were both co-chairs. But it has been an uneasy peace, a frozen conflict, since then,” Sleboda explained.

“And there was a major outbreak of fighting last in 2016 a few years ago and now once again,” Sleboda noted, adding that the countries “are trading accusations of who is responsible, and it’s not immediately clear.”

However, the shooting hasn’t actually broken out in the Nagorno-Karabakh, Sleboda said.

“It’s actually breaking out in the northeast of where the two countries meet, and that’s Tavush in Armenia and Tovuz in Azerbaijan. And there has been an exchange of artillery, mortar and some tank fire, and there’s at least 16 dead so far, 11 military on the Azerbaijani side, another four on the Armenian and at least one Azerbaijini civilian dead.

“It seems that they’re both fighting over - it’s a very mountainous, high-terrain area - and it seems they are fighting over strategic outposts that have high ground in the area, and that it’s still very much a big strategic concern for the two sides there. The high ground, the mountainous terrain ... makes defense very easy, but it makes fighting in general very difficult. And both sides are claiming accusations that the other is responsible for this, and both sides are claiming that the other is doing it to distract from their own domestic coronavirus and economic woes,” Sleboda explained.

According to Azerbaijani authorities, Armenian artillery killed one civilian named Aziz Azizov in the Tovuz district village of Aghdam on Tuesday. Baku also said that houses in the villages of Dondar Gushchu and Alibeyli were targeted, Eurasia Net reported.

While Russia and the US are “both calling for restraint and easing of tensions” in the region, Sleboda explained, Turkey, “which strongly backs Azerbaijan, has gone to the extent of saying that they could enter into conflict with Armenia over this.”

“There were big protests in Baku, in the Azerbaijani capital, in the last 24 hours: up to some 30,000 people in the streets demanding war, demanding that the government retake Nagorno-Karabakh, and the protesters had to be suppressed with water cannons and tear gas and baton charges,” Sleboda explained.

However, the conflict also has geopolitical importance, as Armenia has close ties to Russia, and Turkey is seeking to gain leverage over Russia, Slebonda explained.“Armenia is a member of the Russian-led Security Treaty Organization …

Armenia is also a member of the Eurasian Union, so it has very close ties to Russia, but Russia has no desire to be drawn into an Armenian-Azerbaijani conflict and has long played a role of keeping the two at peace and not being seen as taking too strongly to Armenia’s side,” Sleboda explained.

However, Azerbaijan has a far stronger military than Armenia.

“Armenia’s economic difficulties - being blockaded by Turkey, the Russian-Georgian conflict limiting trade there - have been turned in Azerbaijan’s favor, and Azerbaijan, with plentiful energy resources, has drastically built up their military in their past two decades … Azerbaijan’s military strength related to Armenia leaves open the serious possibility that Azerbaijan may be capable of storming the Nagorno-Karabakh by force if tensions fully broke out. So that’s a major point of concern there,” Sleboda explained.

“Turkey wants to imagine itself as kind of a neo-Ottoman Empire and also a supporter of Islam, or at least an Islam that looks like itself, and it sees leverage with Azerbaijan to chip into the post-Soviet space there, gain the influence into the Caucasas … more immediately, [Turkish President Recep Tayyip] Erdogan probably sees kind of a chance to gain some leverage on these two conflicts that Russia is on the other side of in Syria and Libya. Also there are these domestic, national tensions. Erdogan’s base is very nationalist and Islamist, and going into elections in the next year, Erdogan even reverting Hagia Sophia from museum to a mosque - that’s another sign that Erdogan is appealing to this rather volatile, nationalist, Islamist base,” Sleboda added.

“Turkey keeps basically poking the beehive with a stick, and that could always result in something that no one really wants on all sides,” Sleboda concluded

000000
Popular comments
As the legal successor of the USSR, this dispute is up to Russia to resolve. While Armenia must rejoin Russia. There is no other choice.

FreedomRain
16 July 2020, 04:33 GMT1
000000
To what extreme does Russian "appeasement" for Erdo go under the influence of pro-Turkish forces? Will Russia allow Turkey to harm Armenia? Russian "appeasement" on February 2020 allowed Turkish drones to wiped out the Syrian army after a Russian airstrike killed Turkish soldiers; Russia didn't tell the Syrian army or give the Syrian army time to prepare for Russia's one-sided ceasefire. Russia's sudden unannounced one-sided ceasefire allowed the jihadist to take back parts of Idlib and stopped the Syrian army from capturing Jisr-shugur. President Assad should know Russia is not reliable as long as pro-Turkish forces are guiding decisions on Syria, so there will be more sudden one-sided unannounced ceasefires if it "appeases" Erdo. Instead president Assad should turn to Iran which the Feb 2020 events show that Assad should of listen to Iran for the past several years since Iran doesn't suffer from "appeasement".