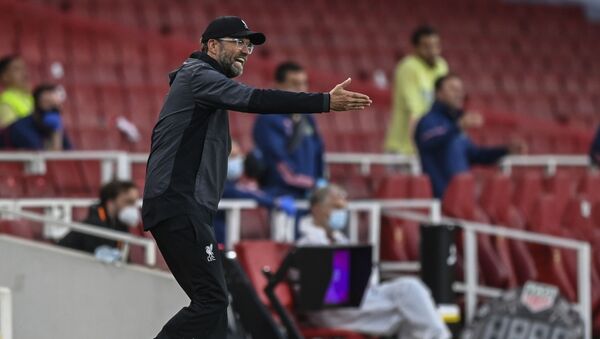 While some social media users poked fun at Klopp's facial expression, others wondered how he might react when interviewed.

It appears that Jurgen Klopp, manager of Liverpool Football Club, has given rise to a fresh wave of memes thanks to his reaction during the recent match between his team and Arsenal.

As Liverpool ended up being defeated by 2 goals to 1, images of Klopp with his mouth agape, staring into the distance, spread across social media, with Goal remarking how he "cannot believe what he's seeing from his players today".

Many social media users went on to poke fun of Klopp's facial expression.

Klopp seeing his side concede a second to Arsenal #ARSLIV pic.twitter.com/0ueiDSDbVk

Jurgen wondering what the heck is going on at half time #ARSLIV #Klopp pic.twitter.com/2kcsQNpndq

​Some joked about how Klopp might react during an interview.

Klopp when he's gonna get interviewed: "We are not focused on getting the points record" #ARSLIV P pic.twitter.com/p3S7vXHxLs

​And there were also those who speculated what might've been happening behind the scenes during the match.

Jurgen Klopp in the back at full time:#ARSLIV | #LFC pic.twitter.com/C2VEFrhCpV

​While professional football in the UK was suspended in March amid the ongoing global coronavirus pandemic, the Premier League resumed its matches last month, but with the games being played behind closed doors, and no fans allowed in stadiums.