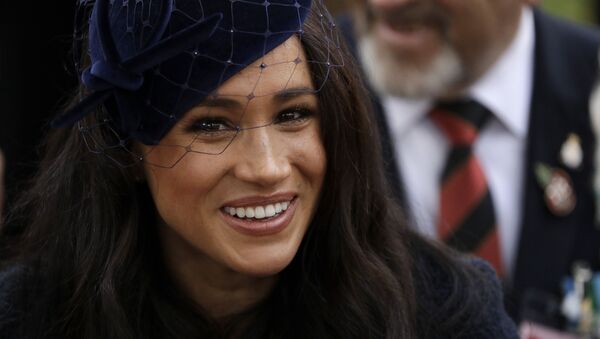 Meghan Markle left the royal palace in March to move to her native Los Angeles via Canada, with her husband Price Harry and one-year-old son Archie. According to some, the Duchess of Sussex may not rule out the option of entering the American political scene now.

Meghan Markle will “no doubt” make a run for the White House, TV presenter and royal commentator Beverley Turner told Channel 5’s Jeremy Vine, as quoted by the Daily Star.

"She will run for President, I have no doubt about it. I have no doubt, I think this is all part of the plan,” Turner claimed. “It may not be very soon but it will be.”

Her comments were met with surprise by legendary British presenter Jeremy Vine, but Turner assured him that she had it “on fairly good authority” that Meghan Markle will make a bid for the Oval Office one day.

"There may be worse Presidents, I would like to see a mixed-race woman in the White House, I would,” she went on.

The comments come just several days after the Duchess of Sussex gave her first public speech since stepping down from her royal duties this March. Markle joined her friend Priyanka Chopra and former presidential candidate Hillary Clinton for a 2020 virtual Girls Up Leadership summit this week. During her online speech at the event, the former actress discussed breaking with the “status quo” and challenging “the norms” – comments many linked to her experience within the royal family and decision to step down as a senior royal.

"Another thing about those lawmakers, leaders and executives that I mentioned earlier. Many of them, for better or worse, do not listen until they have to. Because the status quo is easy to excuse and hard to break but it will pull tightest right before snapping,” she was quoted as saying.

Meghan Markle has never publicly stated her willingness to run for office. However, it was reported in November 2019 that she had a private meeting with former US secretary of state Hillary Clinton at the UK’s Frogmore Cottage. According to the Daily Mail’s royal correspondent Rebecca English, the two women have “a lot of admiration for each other” and the meeting was “very sweet, warm”.

Meghan Markle and Prince Harry are now living in Los Angeles with their one-year-old son Archie after moving there from Canada. The Sussex officially stepped down from their royal duties in March following their bombshell announcement in January that they would now start living “financially independent life”, which they will balance between the United Kingdom and North America.