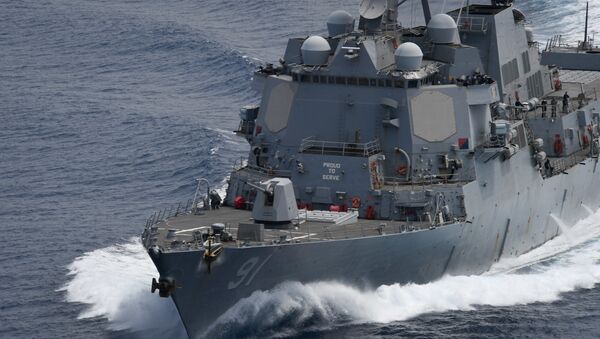 The Venezuelan government has denounced a “freedom of navigation operation” performed by the US Navy on Thursday, calling the violation of Venezuelan waters by a US warship ostensibly defending the freedom of the seas “erratic and childish.”

US Southern Command (SOUTHCOM) announced on Thursday that a US Navy destroyer, the USS Pinckney, had “challenged Venezuela’s excessive maritime claim in international waters during a successful freedom of navigation operation in the Caribbean Sea.”

“The illegitimate Maduro regime improperly claims excessive controls over those international waters, which extend three miles beyond the 12-mile territorial sea, a claim that is inconsistent with international law,” SOUTHCOM said.

The US has maintained since January 2019 that Venezuelan President Nicolas Maduro is not the legitimate leader of Venezuela, instead championing an unknown politician named Juan Guaido, who never ran in a presidential election.

Freedom of navigation operations (FONOPs) are one tactic adopted by the Pentagon to challenge territorial claims around the world, but especially in the South China Sea and Taiwan Strait. Such operations involve sailing straight through claimed waters as if those claims did not exist, all while posturing as defenders of the “right of nations to access, transit and navigate international waters,” as SOUTHCOM commander Adm. Craig Faller put it in the news release, even if that right was never in question.

Venezuelan Foreign Minister Jorge Arreaza denounced the FONOP in a Thursday statement, calling it “an inexcusable act of provocation” and “erratic and childish.”

Arreaza noted the USS Pinckney sailed at a distance of 16.1 nautical miles from the Venezuelan coast, well within the country’s contiguous zone, which extends up to 27.6 miles from the coast and where, according to the United Nations Convention on the Law of the Sea, a nation “may exercise the control necessary to (a) prevent infringement of its customs, fiscal, immigration or sanitary laws and regulations within its territory or territorial sea; (b) punish infringement of the above laws and regulations committed within its territory or territorial sea.”

“The entry of the American boat in a sneaky manner into Venezuela's jurisdictional waters is a totally clear violation of International Maritime Law and can qualify as an inexcusable act of provocation,” Arreaza said. He attributed the maneuver to US President Donald Trump’s “desperate campaign to attract the Latin American vote” in Florida “in exchange for the permanent and illegal aggression against Venezuela.”

“The institutions of the Republic of Venezuela, and especially the naval forces, will enforce the sacred sovereignty and territorial integrity of Venezuela in total conformity with international laws, looking at all the actions that are considered necessary, without falling for absurd provocations that are intended to affect the peace and tranquility of Venezuelans as well as the peoples of Latin America and the Caribbean,” Arreaza said.

A squadron of US Navy ships, including the USS Pinckney, was dispatched to the Caribbean in May as a quintet of Iranian fuel tankers set sail for Venezuela, bringing much-needed gasoline to offset an acute fuel shortage. The tankers ran the blockade as the US ships did not try to stop them.

The warships ostensibly formed part of a larger “counter-narcotics” operation opened up by the Trump administration as the COVID-19 pandemic set in; however, the effort has mostly focused on disrupting Venezuela. The Trump administration charged central Venezuelan government figures, including Maduro, with drug trafficking earlier this year, putting out bounties for their capture.