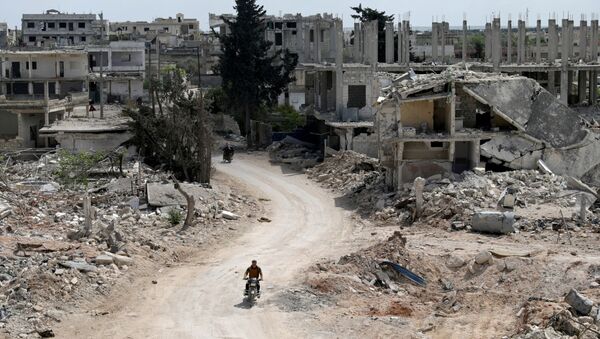 A self-declare aid worker in Syria reporting on live updates from the war-torn country and operating under the auspices of a militant jihadist group was detained last month amid rising repression of dissident elements.

The jihadist organisation that still occupies Idlib and other parts of north-western Syria declared that a British-born man who runs an online organisation will stand trial.

BBC cited a statement of Hayat Tahrir al-Sham (HTS) - an Al Qaeda*-aligned militant group fighting against the Syrian government - saying that Tauqir "Tox" Sharif had been released on bail on request of his family and campaigners.

"The court informed him that the date of his hearing with the judiciary was after 15 days... and that during his release he could prepare his defence," it said.

HTS is an alliance led by the former Syrian faction of al-Qaeda, previously known as 'Al-Nusra Front', and is a designated terrorist organisation by the UN, US, and others.

Sharif posted video on Thursday saying that he is thankful to be out and that he is "confident" the issue will be resolved soon.

The last 24 hours have been overwhelming. Thank you to everyone who campaigned and believed in me. We came here for one purpose and that is to serve the people of shaam and uphold your amanah, which we will continue to do inshaAllah.
- Tox#FreeTox #الحرية_لأبو_حسام pic.twitter.com/7ttcdtteWp

"We pray Allah keeps him and his family safe and that he is cleared of all charges," it added.

​Sharif, originally from east London, was detained in June by HTS and charged with funding "projects that incite division".

Mr Sharif had previously been stripped of his citizenship by the UK government 2017 for being connected to an Al Qaeda-linked organisation.

Despite being entitled to Pakistani nationality through his father and admitting he had fought in Syria and wielded an AK47 rifle, Mr Sharif denies the allegations.

The UK-based watchdog, the Syrian Observatory for Human Rights, reported that he had been detained over alleged ties with rival jihadist groups.

Sharifs release comes as HTS begins to crackdown on dissidents and defectors in areas currently under its control, as Syrian government forces retake large swaths of the country.

At the beginning of the Syrian Civil War, Idlib was seized by opposition forces. In 2017, HTS expelled Ahrar al-Sham - a rival jihadist organisation - from Idlib city.

HTS has sworn allegiance to the Syrian Salvation Government - an unrecognised self-proclaimed alternate government to the government of Bashar al'Assad.

Following the rise of the Islamic State and their use of social media propaganda, the UK government has asked people to report online material which promotes terrorism.