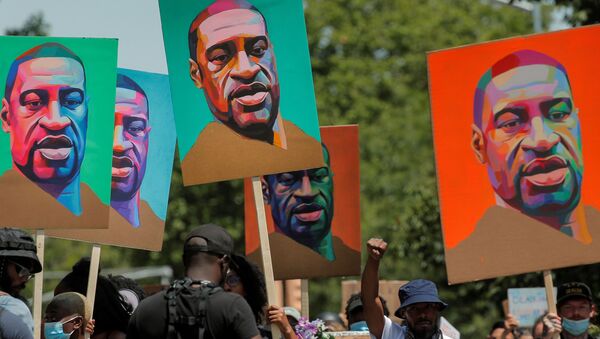 Muhammad Osman
All materialsWrite to the author
Last week, the Minneapolis Police Department released footage from body-cameras worn by two of the white officers involved in the fatal arrest of African-American George Floyd on 25 May. The release of the video is said to provide a fuller understanding of the events surrounding Floyd’s killing.

Footage from body-cameras worn by two of the Minneapolis police officers involved in the killing of African-American George Floyd, which triggered an ongoing wave of anti-police-brutality and anti-racism protests across the United States as well as in major cities around the world, was released on Wednesday and made available for viewing by appointment only, according to Fox News.

Taken from the body-cameras of former officers Thomas Lane and J. Kueng, who face charges of aiding and abetting both second-degree murder and manslaughter, the video reportedly details the critical moments leading to Floyd’s death.

The video reportedly shows how officers approached Floyd, who was inside his vehicle outside a convenience store, where he had been reported for trying to pass off a fake $20 bill, and how Lane pointed his gun toward the suspect, prompting Floyd to plead with him not to shoot while telling Lane that he had been shot by police in the same way previously.

“I’m sorry, I’m so sorry. God dang man. Man, I got shot. I got shot the same way, Mr. Officer, before,” Floyd told Lane, after he pulled his weapon and told Floyd to step out of the car, according to transcripts of the incident released last Wednesday. “Mr. Officer, please don’t shoot me. Please man.”

The video shows the officers eventually handcuffing Floyd, as he urges the officers to not put him in a squad car because he is claustrophobic.

Officer Derek Chauvin, who has since been charged with the murder of Floyd, and Kueng together placed Floyd’s handcuffed hands in position behind his back. Kueng seemed to press his knee on the suspect’s bottom or just below, according to Fox News.

In the meantime, Lane appeared to press Floyd’s feet, as Chauvin began placing his knee on Floyd’s neck, eventually telling the 46-year-old that he was under arrest.

Floyd reportedly repeated the words “I can’t breathe” over 20 times as Chauvin continued kneeling on his neck for a period of eight minutes and 46 seconds.

“Then stop talking, stop yelling, it takes a heck of a lot of oxygen to talk,” Chauvin is heard to say to Floyd.

Before becoming unresponsive, Floyd was heard in the video calling for his mother and children, saying, “Tell my kids I love them. … I’m dead”.

The release of the video coincided with Floyd’s family filing a lawsuit earlier in the day in US district court in Minnesota against the city of Minneapolis, condemning the police procedures used in Floyd’s fatal arrest.

Lawyers for the family argued that the city is “the responsible party for the Minneapolis Police Department” as well as for the practices and culture of policing that resulted in Floyd’s death. The filling also demanded the formation of a body “to ensure that the City of Minneapolis properly trains and supervises its police officers”.

“This complaint shows what we have said all along, that Mr Floyd died because the weight of the entire Minneapolis Police Department was on his neck,” said Ben Crump, an attorney for the Floyd family. “The city of Minneapolis has a history of policies, procedures and deliberate indifference that violates the rights of arrestees, particularly black men, and highlights the need for officer training and discipline”.