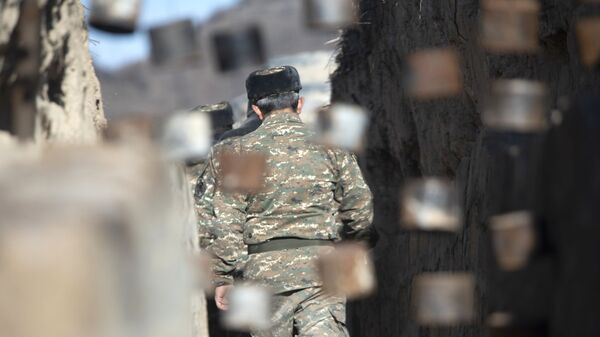 MOSCOW (Sputnik) - Azerbaijan's threat to carry out an airstrike on the Armenian-based Metsamor nuclear power plant (NPP) is in violation of international law, the Armenian Foreign Ministry said in a statement on Thursday, calling upon Baku to publicly denounce threats like that.

Earlier in the day, Azerbaijani Defense Ministry spokesman Vagif Dargyakhly said that Armenia should beware that Baku has the necessary equipment to conduct a precision strike against the Metsamor NPP.

"The actions threatened by the Ministry of Defense of Azerbaijan are a flagrant violation of the International Humanitarian Law in general and the First Additional Protocol to Geneva Conventions in particular. Such threats are an explicit demonstration of state terrorism and genocidal intent of Azerbaijan," the Armenian ministry's statement read.

The ministry emphasized that such statements by Azerbaijan were "a menace to all the peoples of the region, including its own people."

"We strongly condemn the nuclear threats voiced by Azerbaijan, which demonstrate absolute absence of responsibility and sound judgement from this particular member of the international community. Azerbaijan must publicly denounce such threats at once," the ministry said.

Clashes broke out in the border area that separates Armenia's Tavush province and Azerbaijan's Tovuz region this past Sunday. The escalation is in its fourth day now, a reasonable distance away from the disputed territory of Nagorno-Karabakh, where the two sides have waged war for decades.

Azerbaijan has by far reported 11 troops killed as a result of armed hostilities, while Armenia has reported four fatalities.