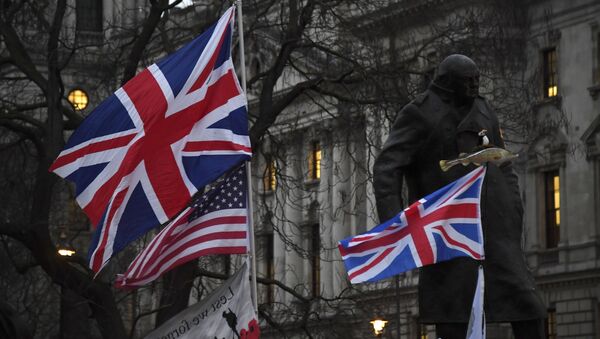 The UK’s Secretary for International Trade, Liz Truss, has announced on Wednesday that Britain has completed its first round of negotiations for a Free-Trade Agreement with Australia and is looking to ratify agreements with other nations around with world - including Japan and the US.

Political Commentator Marcus Stead looks at what effect this will have on negotiations between London and Brussels.

Sputnik: With trade deals between Australia, Japan and the US in the works what effect will this have on the attractiveness of the UK to other countries around the world?

Marcus Stead: Well, the first thing to point out is untangling the United Kingdom's relationship with the European Union, first of all, needs to be done responsibly, and it needs to be done cautiously. I have always been careful not to underestimate the consequences of a so-called no-deal Brexit and the first thing to point out is that the deadline for extending the transition period talks expired on the 30th of June. So, there could be no extension to the covered deadline. This, in turn, will affect how we can fold trade deals with the wider world. The Prime Minister has hinted that he wants to step up the intensity of talks and he wants the outline of a deal to be agreed by the end of July. The EU has said the 31st of October is a more realistic deadline but that would leave businesses with just two months to prepare for the changes that follow. These deadlines are already very tight indeed, even without the added complications of the COVID-19 pandemic, and although an extension to the transition phase is no longer possible, it does seem very likely that we'll end up with an extension but it'll be called something else. It will be packaged in a different way so to speak. The most obvious way of doing this would be to amend the date of the transition period in the withdrawal agreement. This will almost certainly require the European Court of Justice to give its legal opinion first, however. For Brexit to be a success it is absolutely essential that the UK is not part of a customs union because it will prevent our country for being able to agree on free trade deals with the wider world or even set tariffs on our own terms to countries where no free trade deal exists. The importance of not being part of a customs union cannot be understated. If we were to remain in that it will be very difficult indeed to form trade deals with the wider world. Specifically, in relation to goods rather than services. The business community has enough to worry about at the moment. It doesn't need to have the hassle of endless red tape and delays at customs hanging over it but it also needs to be in a position to take advantage of the tremendous trading opportunities with the wider world that the UK will be able to do once freed from the shackles of the EU.

Sputnik: How will this impact trade negotiations between Britain and the EU?

Marcus Stead: I'm not one of these people who is predicting an apocalyptic scenario in terms of food on the supermarket shelves in the event of a so-called no-deal Brexit. After all, I cannot think of a single item of food or drink that couldn't be sourced from outside the EU if we absolutely had to. However, there would be significant short-term disruption in terms of supply chains, as they were rebalanced and sourced elsewhere, but we will get over that in time. The consequences of a so-called no-deal Brexit go well beyond the prospect of queues stretching down the motorway near Dover. Let's take energy as a basic example, leaving the European Economic Area would severely increase the risks of the lights going out and according to the National Grid over the next decade, we plan to more than quadruple the current 4 gigawatt capacity of our interconnectors, to 18.5 gigawatts, via new cables from France, Belgium, Norway and Iceland. This is to keep the grid function and when it's planned at 68% of our generating capacity will derive from weather-dependent wind and solar. Well, this system relies on us being in the European energy market, which sets complex rules that allows it to operate. As the European Commission's notice to stakeholders on cross border trade and electricity makes clear, once we become a so-called third country, the EU could refuse to certify us as continuing participants. Now there is a huge risk.

Sputnik: What challenges must Britain prepare for amid efforts to secure a free trade deal with the EU going forwards?

Marcus Stead: We have to start thinking of Brexit as a tremendous opportunity and once we are freed from the shackles of the EU, we need to look at the way the world has changed. The development of China, the development of Singapore over the last 60 years has been an enormous success story, if we look at India you can walk around parts of India and literally see poverty disappearing before you as it develops economically and also dare I say in the Middle East. There are opportunities there as well. We need to look at countries with growing populations and growing economies. The EU is shrinking in terms of an ageing demographic, an ageing population, over-regulation, a very old-fashioned based economy. There are opportunities in technology, in particular, high tech and 5g will present opportunities as well. We need to look at these in terms of growing populations, growing economies, places in the world where people actually live. The modern world is all about flexibility. It's about adaptability and the protectionism and the 20th-century thinking of the EU is very much in the past. To look to the future and have the flexibility and adaptability and the light footedness needed succeed in the 21st century, we need to embrace the opportunities Brexit brings. Once we are free from the shackles of the EU, we can do that and at the moment, not enough emphasis is placed on developing those opportunities with the growing world.