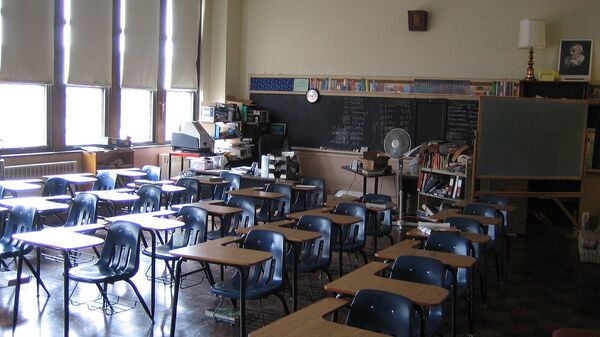 CC0 / /
Subscribe
International
India
Africa
A new survey released Wednesday by Politico and Morning Consult revealed that a majority of Americans oppose the Trump administration’s demand that schools fully reopen in the fall.

The study, which surveyed 1,992 registered voters between July 10 and July 12, also found that 65% of participants are against cutting funding to schools that refuse to reopen, with only 22% supporting the idea. In addition, 41% of voters said they believe the Trump administration wants to reopen schools to help boost the economy, while 43% said that the reason for the push to reopen schools in the fall is to ensure that students continue to receive an education.

On Sunday, US Education Secretary Betsy DeVos said that schools should fully reopen in the fall, a position that has US President Donald Trump’s full support, and threatened to cut funding to schools that don’t reopen. However, despite the push to reopen schools amid a pandemic, the Trump administration has failed to provide information on how to do so safely.

“American investment and education is a promise to students and their families,” DeVos said on “Fox News Sunday” over the weekend. “If schools aren’t going to reopen and not fulfill that promise, they shouldn’t get the funds. Then give it to the families to decide to go to a school that is going to meet that promise.”

Last Thursday, US Centers for Disease Control and Prevention (CDC) Director Robert Redfield also said that classrooms should reopen in the fall.

"I'm confident we can open these schools safely, work in partnership with the local jurisdiction.”

However, despite the Trump administration’s fervent push to reopen schools, the Los Angeles and San Diego public school districts in California on Monday announced that classes in the fall will be held online. In addition, Arlington County in Virginia this week announced that its students would start virtual learning this fall.