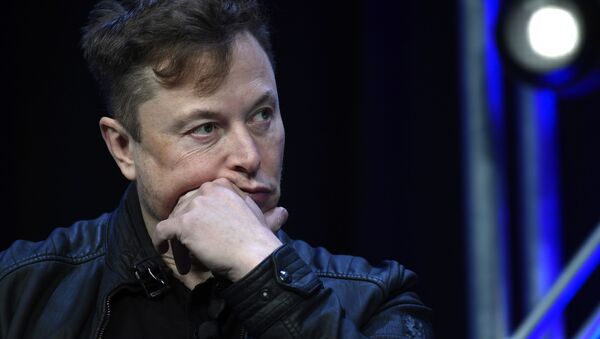 An unprecedented hacker attack affected Twitter, which, starting with the accounts of Elon Musk and Bill Gates, targeted a large number of verified accounts. Tweets with bitcoin scam texts appeared on hacked pages, urging users to send money to the specified address.

The Federal Bureau of Investigation (FBI) said in a statement that it is aware of the hacker attack affecting high-profile twitter accounts and urged the public not to fall victim to the cryptocurrency scam.

"We are aware of today's security incident involving several Twitter accounts belonging to high profile individuals," the statement from the FBI's San Francisco field office said, quoted by ABC on Wednesday. "The accounts appear to have been compromised in order to perpetuate cryptocurrency fraud. We advise the public not to fall victim to this scam by sending cryptocurrency or money in relation to this incident."

Soon after an imposed earlier limitation on tweeting for verified Twitter accounts was lifted, Twitter announced that, as the investigation into the incident is ongoing, most users should again be able to tweet and reset passwords. The company's statement noted that "this functionality may come and go".

"Most accounts should be able to Tweet again. As we continue working on a fix, this functionality may come and go. We're working to get things back to normal as quickly as possible", Twitter's statement said.

"This request looks like it might be automated. To protect our users from spam and other malicious activity, we can’t complete this action right now. Please try again later".

After the initial scam address was reportedly blocked by Twitter, the alleged new one was first posted in the account of Kim Kardashian, when it appeared to have been hacked.

Feeling nice! All BTC sent to my will be sent back doubled, enjoy.

​According to transaction data, scammers managed to get at least $113,000.

Earlier, Twitter Support announced that it was aware of the attack, and said that an investigation into the matter is ongoing and steps are being taken to fix the situation.

"We are aware of a security incident impacting accounts on Twitter. We are investigating and taking steps to fix it. We will update everyone shortly", the company tweeted.

Among those attacked were the Twitter pages of companies, politicians and artists, as well as thousands of ordinary Twitter users. 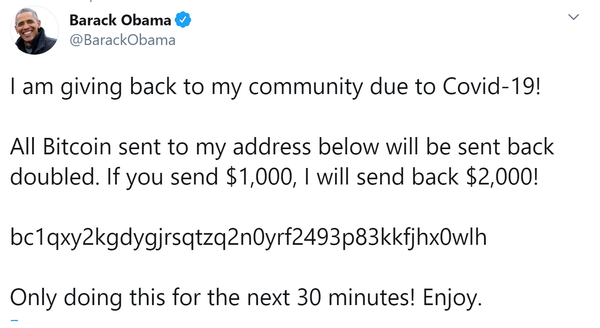 ​The account of Joe Biden was hijacked, along with the accounts of Warren Buffet and Mike Bloomberg. Responding to the hack, Biden's campaign announced that the account was "locked down" immediately after the scam tweet appeared.

BREAKING: Joe Biden has been the latest victim of this massive hack. By far the largest in Twitter's history. pic.twitter.com/yrbJxShWdz

​The Twitter accounts of Apple and Kanye West were hacked after those of Bill Gates and Elon Musk.

"We are giving back to our community. We support Bitcoin and we believe you should too! All Bitcoin sent to our address below will be sent back to you doubled! bc1qxy2kgdygjrsqtzq2n0yrf2493p83kkfjhx0wlh...[] Only going on for the next 30 minutes", Apple's Twitter account read. 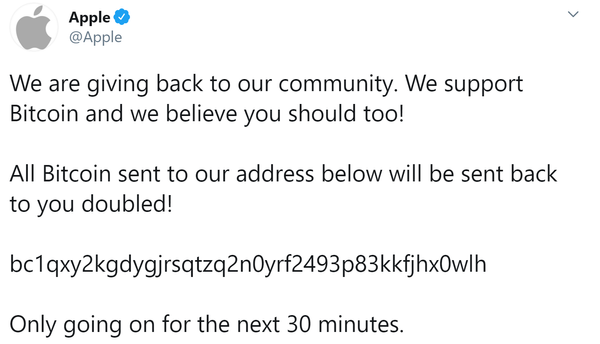 A screenshot of Apple's Twitter page targeted by hackers
© Sputnik 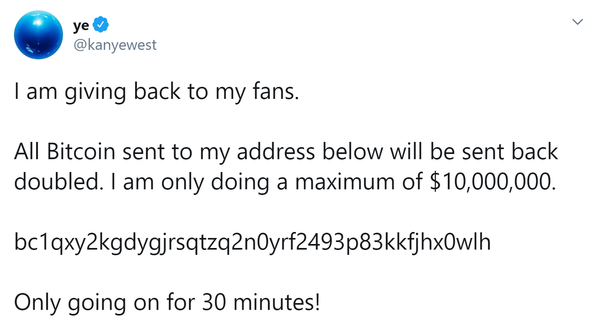 Earlier, the scam had tech billionaire Elon Musk announcing via Twitter that he "felt greatful [sic]" and pledged to double all payments sent to "his BTC address", noting that he was "only doing this for the next 30 minutes".

"Feeling greatful, doubling all payments sent to my BTC address! You send $1,000, I send back $2,000! Only doing this for the next 30 minutes", the now deleted tweet read, supplied with a BTC address "bc1qxy2kgdygjrsqtzq2n0yrf2493p83kkfjhx0wlh". 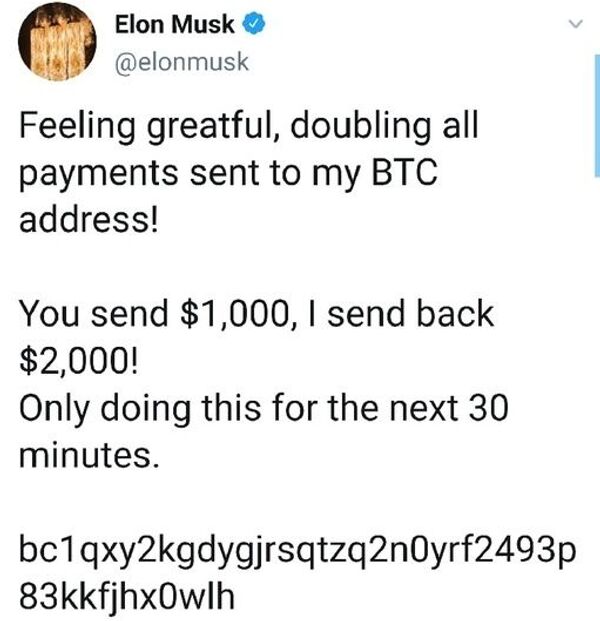 After the first tweet was deleted, another came shortly after, with similar text. It was deleted after a few minutes as well, but was followed by the third scam tweet.

You know I living giving back to my community.

Tell your family & friends! Only going on for 30 minutes.

I am giving back to the community.

The tweet parade then claimed that thousands of dollars had already been sent.

​Twitter users immediately raised concerns that Musk's account had been hacked, warning others not to send money to the given address and recalling other blue-ticked accounts posting the same call.

Don't he was hacked

Some users expressed worry on the possible impact of the hacker attack on the world leader's accounts.

When it occurs to you that, instead of running a Bitcoin scam, someone could hack a head of state’s account and, say, start a war pic.twitter.com/UJUPpnIeFW

​Twitter spokeswoman Aly Pavela said the company was looking into the issue and would have more to say later, cited by NBC News.

Due to the attack that spanned multiple verified accounts, Twitter shares plummeted, according to trading data shared in social media.

​In the first hour of the series of attacks, social media users noted that at least 5,314 people fell for the scam.

If you look at the hacker's blockchain, 5,314 people have fallen for the scam already, and sent these hackers $7.8M USD thus far. Wow. pic.twitter.com/2M54QEKvS5

​One user listed other accounts that had been hacked.

Following Twitter Accounts have been hacked - be careful don’t fall for any giveaway.