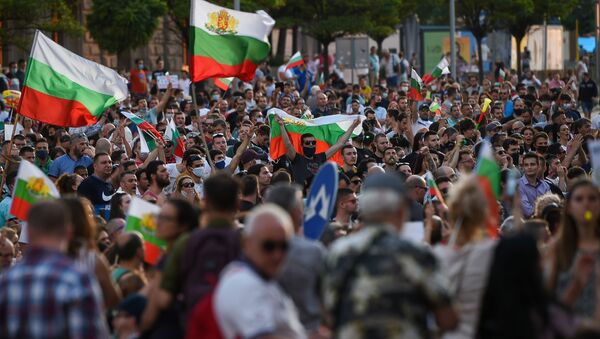 MOSCOW (Sputnik) - Bulgarian President Rumen Radev on Wednesday called on the government and the prosecutor general to resign amid the anti-cabinet protests.

"The current oligarchic model of governance is rejected by the people. The restart of the political process and the modernization of the country goes through a resignation of the cabinet and of the prosecutor general and through honest elections," Radev said while addressing the nation, as quoted by the Bulgarian National Radio.

Earlier in the day, the Bulgarian Socialist Party put to parliamentary vote a motion of no confidence against the current government of Prime Minister Boyko Borissov for the fifth time. The motion came amid ongoing anti-government protests staged by Radev's supporters who accuse the cabinet of corruption. Demonstrations were triggered by the arrest of Radev's two advisers charged with abuse of influence and disclosure of state secrets.

The conflict between the president and the government has been ongoing since the beginning of the year, after prosecutors suspecting Radev of corruption turned to the Constitutional Court to interpret his immunity. Radev said in turn that he had lost confidence in the government because it did not act in the interests of citizens.

Photos of the protests have been shared online.

The fake mainstream media tell us that there were only 100 people at the protest in Bulgaria. The facts: pic.twitter.com/5Zvo5Tr6EL

Day 7. #Bulgaria protests for #democracy. #Mafia out! #Resign!
Today I am in my home town of #StaraZagora.
People protest here with as much heart! pic.twitter.com/ftDMX4fWin