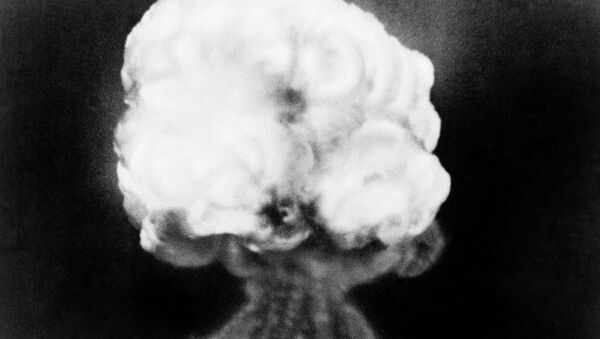 © AP Photo / File
Subscribe
Thursday marks the 75th commemoration of the Trinity Test, the first detonation of a nuclear bomb, in the New Mexico desert. However, the bomb’s dirty explosion has caused untold suffering downwind of the blast - suffering never acknowledged or compensated for by the US government, an expert told Sputnik.

In the Jornada del Muerto region of New Mexico on July 16, 1945, the world entered the nuclear age. A nuclear explosion equivalent to 20,000 tons of TNT demonstrated that a viable city-annihilating weapon had been produced by the top-secret Manhattan Project and could be used to force the Japanese Empire to surrender unconditionally.

It was code-named “Trinity.” The massive fireball vaporized the tower the bomb had been situated on and shot hundreds of tons of irradiated soil more than 50,000 feet into the air.

Kevin Kamps, the Radioactive Waste Watchdog at the organization Beyond Nuclear, told Radio Sputnik’s Loud and Clear Wednesday that the Trinity test was a trial run for the bomb used to destroy the Japanese port city of Nagasaki on August 9, 1945.

‘A Lot of People Were Downwind’

“It was more complicated than the uranium weapon” that was used first, against the manufacturing center of Hiroshima, on August 6. “They knew that the uranium weapon was going to work, they were convinced of that, so they didn’t test it ... But they had to test the Nagasaki bomb before they dropped the actual one, because it was very complicated - and it worked in both places, unfortunately.”

Together, the bombs dropped on Hiroshima and Nagaski killed some 225,000 people, although this is likely a conservative estimate, according to Columbia University’s K=1 Project.

“In New Mexico, because it was ultra-secretive, they didn’t even evacuate locals downwind - and there were ranching families immediately downwind, in the same valley, not too far away. And sure enough, not too many years later, the teenage son of that family died of leukemia, because there was massive fallout from the Trinity explosion,” Kamps said. 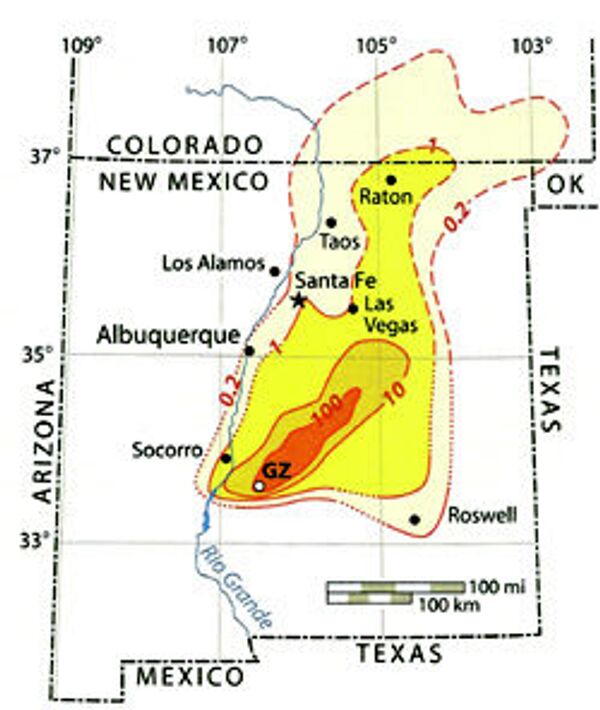 Estimated exposure rate from radioactive fallout generated by the Trinity nuclear test on July 16, 1945. Measurements given in milliroentgens per hour (mR h-1) 12 hours after detonation; GZ = ground zero
© US Centers for Disease Control and Prevention

“And a lot of people were downwind. A lot of those people were Native American, like the Mescalero Apache ... and a lot of Hispanics in that area,” Kamps noted. “To this day, the Tularosa Basin Downwinders Consortium, which is led by Tina Cordova, has done amazing work. They’ve gotten pretty much the entire New Mexico congressional delegation onboard [with] demanding that the Radiation Exposure Compensation Act be applied to New Mexicans, who were the first downwinders’ in human history.”

A 2017 study by the University of Arizona found that radioactive fallout from more than two decades of open-air nuclear tests had resulted in between 340,000 and 690,000 deaths in the United States by 1973, when the US signed the Threshold Test Ban Treaty, sharply limiting the size of underground nuclear tests.

Congress passed the Radiation Exposure Compensation Act in 1990 and expanded it in 2000, paying out more than $2 billion in compensation to residents of nearly a dozen US states through the act. However, Kamps cautioned, the Tularosa downwinders have never been included in the act.

“There have been inroads made, progress made at the Nevada Test Site to get certain populations compensated and acknowledged. The Western Shoshone often fall through the cracks on that one, for example, but compared to New Mexico, there’s been tremendous progress made in Nevada,” he said.

However, the effects of the radioactive dust and debris thrown high into the atmosphere by the nuclear blasts were felt far beyond the states compensated by the act. A 1986 New York Times story, published in the aftermath of the Chernobyl nuclear disaster in the Soviet Union, recalled that in 1954, 1956 and 1959 - years following intensive above-ground nuclear testing in the American Southwest - “plutonium was found in the soil in Salt Lake City, Denver and Houston. Stillbirth rates in New York showed increases,” and governments continued to allow the sale of dairy and other foods now known to be irradiated by nuclear blasts with the radioactive isotope strontium-90.

Kamps told Loud and Clear host Nicole Roussell that studies about the effects of the Trinity blast specifically have been “few and far between.”

“Plutonium is ultra-hazardous: it takes a speck of plutonium inhaled into the human lung to initiate lung cancer, and it may take years or it may even take decades” for them to die, Kamps said. “And even after the person dies of lung cancer - say, that they are cremated after they die - that plutonium will very likely go out the stack at the crematorium and contaminate somebody else in the environment. Plutonium-239, for example, has a 24,000-year half-life, so that means 240,000 years of hazard, which is as old as our species is.” 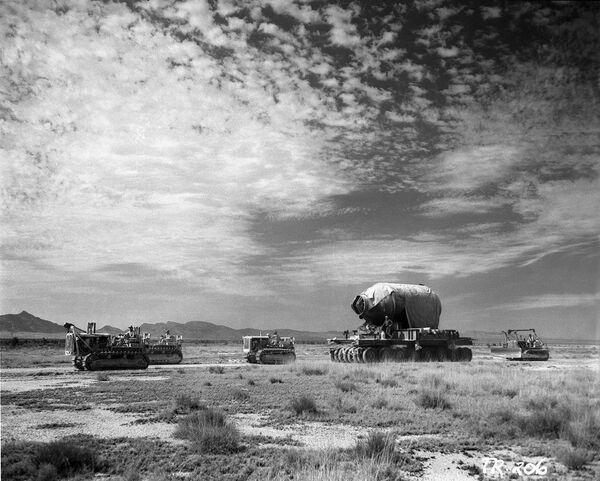 "JUMBO," a 120-ton steel vessel designed to contain the explosion of the Trinity bomb's high explosive and permit recovery of the active material in case on nuclear failure, is delivered to the test site in Alamogordo, New Mexico, on July 16, 1945. However, JUMBO was never used for this purpose.
© US Department of Energy

“So a lot of plutonium was released by this blast - and other things during that millisecond of fissioning that took place, other artificial radioactive poisons like cesium-137 or strontium-90, and the list goes on. There’s a couple hundred radioactive poisons that are generated by the nuclear chain reaction. Each one attacks a different human organ or organs in other living beings out there,” Kamps said.

“So cancers, birth defects, the genetic damage that was caused by Trinity are not entirely known because there have been few or no studies about it, but the anecdotal evidence is widespread and very compelling, and it’s why the Trinity Downwinders Consortium have made such inroads with the congressional delegation out there, demanding compensation, demanding acknowledgment, demanding health care.”

A ‘Low-Use Segment of the Population’

Kamps noted that resistance is largely driven by racist attitudes toward the Indigenous people affected by the tests.

“It’s worth mentioning that back in the 1950s, when nuclear weapons testing began in Nevada, an Atomic Energy Commission document was found - this is the predecessor of the Department of Energy - and in that document the Atomic Energy Commission official said of nuclear weapons testing in Nevada that the people out there are a ‘low-use segment of the population.’ He was referring to cowboys and Indians and Mormons. They really said that. And they said something similar in the Marshall Islands, where they said the Marshall Islanders were more like humans than mice, and so therefore they would be a great test subject to look at in terms of radiation damage,” Kamps explained. “So not only is this racist, but it’s genocidal at the same time.”

“So the reason that I think Trinity has been overlooked all this time is because it was a single test, but it was a particularly dirty one, because they didn’t entirely know what they were doing. And like I said, a lot of the plutonium was simply vaporized into the environment, it got out, and they just decided to ‘skip that one’ unfortunately, so far.”