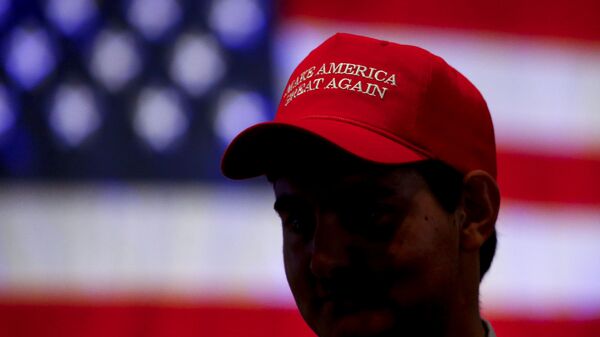 A US man sporting a Make America Great Again hat recently caused quite the uproar at a barbeque restaurant in Mission, Kansas, after he decided to show off his firearm to employees when being asked to follow the establishment’s mask policy.

The shocking encounter, which took place at RJ’s Bob-Be-Que Shack last week, unfolded after 18-year-old diner employee Arlo Kinsey confronted the unidentified individual and informed him that he needed to be wearing a mask inside the eatery.

Kinsey told outlet Kansas City Star that he had simply asked the man to comply with statewide mask orders imposed by Kansas Governor Laura Kelly. However, rather than complying, the man subsequently indicated that he had an exemption: a gun in his hip holster.

“My first thought was, I work in customer service and this is really what’s going to happen? All we’re asking is that you wear a mask for a couple of minutes,” Kinsey said. “We could have taken your order outside if you didn’t want to. But you go into an air-conditioned area, without a mask on, and if I tell you to wear one, you’re going to shoot me? Wow. I make $8.50 an hour, plus tips — for this?”

“It was definitely a threat,” he added.

A stunned Kinsey later made his way to restaurant owner Bob Palmgren, who at the time was working in the back of the restaurant, to inform him of the disgruntled customer. Within moments, Palmgren, a retired Marine, was engaged in a heated conversation with the would-be diner.

“I run over there, and I’m like hey, what’s going on? And he shows me his Trump hat,” Palmgren recalled to the outlet. “And I like Trump. Everybody’s got problems. But it doesn’t make a difference. You don’t have a mask on. And I’m like, ‘your gun’s not going to kill [the novel] coronavirus, now get the hell out of here.’”

While leaving the restaurant, the MAGA-hat-wearing individual told Palmgren he wouldn’t be returning to the eatery, to which the owner responded, “Good, I don’t want you in here.”

“People are crazy,” Palmgren noted. “Especially these days, it’s scary when people have any kind of gun, even if it’s a fake gun.”

“You don’t know what he’s going to do … I have a lot of guys who I know come in here and are concealed carrying. But they aren’t showing their gun to anybody,” he added.

The Kansas City Star revealed that social media posts have been circulating among gun groups that claim state open- and concealed-carry laws require firearm owners to forgo masks; however, no such laws exist, federally or in Kansas.

The Sunflower State’s mask policy went into effect July 3, after health officials confirmed nearly 15,000 positive novel coronavirus cases across 97 of 105 counties within the state. At the time, 272 COVID-19-related deaths had been documented in Kansas.

According to the latest figures released by the Kansas Department of Health and Environment, the state has confirmed over 5,000 additional COVID-19 cases and recorded 16 more novel coronavirus-linked deaths since the mask policy was enacted.