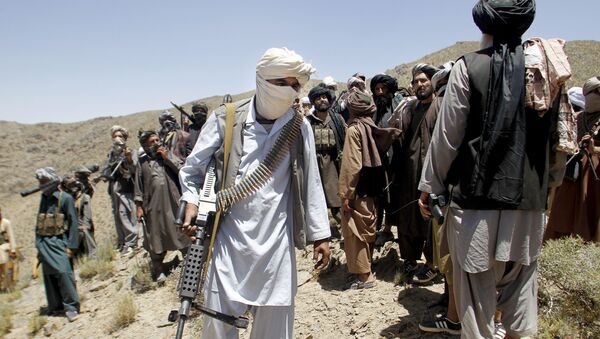 The newspaper has cited new allegations by a former US commander in Afghanistan who accused Russia three years ago, without providing “definitive evidence”, of supplying weapons to the Taliban. Moscow has denied ever arming the Afghan insurgents.

American intelligence officials suspect that Russia had been covertly aiding the Taliban for years, The New York Times reports.

The newspaper cites unnamed Afghan officials as saying that several years ago they had uncovered a “short-lived” Iranian scheme to supply weapons to Taliban fighters via Tajikistan, a former Soviet republic with a 1,350-kilometre-long border with Afghanistan.

The Afghan sources also claimed that Russia had used its fuel imports for NATO and Afghan forces to “ensure influence and keep intelligence assets” loyal. A former Afghan official stated that Russia had supplied extra fuel with convoys of Afghanistan-bound oil tankers for “circulation” inside the country instead of direct cash transfers.

According to The Times, American intelligence officials believe that Moscow had begun supporting Afghan militants since around 2012 as it grew discontented with protracted instability in Afghanistan and the slow pace of the US withdrawal.

Retired General John W. Nicholson told a briefing at the House Foreign Affairs Committee last Thursday the assumption was that alleged Russian assistance had come in “modest quantities” and had been designed to embarrass US troops rather to “be a game-changer”.

“For example, the Taliban wanted surface-to-air missiles, the Russians didn’t give it to them. So I always concluded that their support to the Taliban was calibrated in some sense,” said the general, who commanded the US-led coalition in Afghanistan from 2016 to 2018.

Nicholson had previously pushed similarly explosive, but unsubstantiated claims, back in April 2017. Asked about reports that Russia was providing assistance, including in the form of arms transfers, to the Taliban, he replied at the time: “Oh no, I am not refuting that.”

However, Vincent Stewart, then-director of the US Defense Intelligence Agency, said there was no “real physical evidence” that Russia had offered support to Taliban militants, including with weapons or money.

Two months after Nicholson went public about alleged Russian arms, CNN published a report that the Russian government had supplied improved weaponry to the Taliban via Tajikistan. The story was quickly shot down by military journalists.

Secretary of State Mike Pompeo this month also claimed that Russia had been supplying “small arms” to Afghanistan for already ten years, and that he had numerously raised the issue during his contacts with the Russian counterparts.

Russia’s foreign ministry spokeswoman Maria Zakharova maintained that Russia had always sold arms only to the US-backed government in Kabul and not to the Taliban, which is outlawed in Russia. She also stated that presumed arms transfers were never brought up during meetings with Pompeo.

The newspaper last month reported the US intelligence assumes that Russia had offered bounties to the Taliban for killing American and coalition troops at the time of peace talks between the militants and the Trump administration last year. It was also claimed that US President Donald Trump had received a written briefing on the intelligence but took no action.

Multiple members of the US administration, including Trump himself, have denied that he had been briefed. Russia, the Taliban and the Pentagon have all debunked the report. The National Intelligence Council has also concluded that the government “lacks direct evidence” on the Russian-Taliban “bounties” story.

As The New York Times admits, the US and Russia have cooperated in Afghanistan in the past, but Moscow had grown increasingly critical of the instability near its border as a result of the US-led war there. Russia has also come to embrace the Taliban as an entity that should not be left out of the peace process, and has been acting as a mediator between the militants and Kabul starting from 2017.

In September 2019, just as months-long peace talks collapsed between the US and the Taliban, Russia encouraged the group’s leaders in Moscow to continue negotiations with Trump.