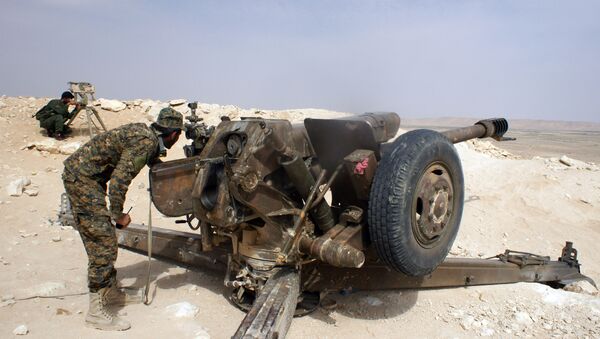 Earlier it was reported that three Mahavir as-Saura militants had been detained and taken to the Syrian city of Tadmore near Palmyra after they found themselves in a minefield.

One of the three militants detained near the city of Palmyra in western Syria told reporters that he had been trained under the supervision of US instructors.

A militant, identified as Abdullah al-Mishuat, said that he and his counterparts were taught how to handle different types of weapons by American instructors who would come to training sessions to "observe from afar, monitor and evaluate the training process". The exercises, however, were conducted by Syrians, according to the militant.

"We were taught to handle all types of weapons by American instructors. All of the weapons were US-made. I saw American instructors who come to training, however, those are conducted by Syrians. Americans observe from afar, monitor and evaluate the training process. The training were [sic] difficult, they lasted for two or three hours, no less," the detained militant told reporters.

Although the group stated that they trained with US-made weapons, they also claimed to have been sent on the mission with Russian guns, according to al-Mishuat.

One detained militant, Jasem al-Ali, said that where their leader died after a group of eight found themselves in a minefield. He revealed that the group was tasked with gathering information about Russian, Iranian and Syrian assets.

"Our group consisted of eight people: seven fighters and one leader who is engaged in smuggling and transporting personnel and drugs. We went on motorcycles to complete the mission and hit the minefield. We got lost and did not know where to go, because the leader died, and began to look for a way out, while continuing to move. Then we were captured, and the Syrian troops took us here. We were sent to carry out tasks in the province of Rakka, in the city of Al Mansoura. We had to get information about Russian, Iranian and Syrian sites", he said.

All three detainees are currently in custody in the city of Tadmor. Syrian soldiers found that the militants carried guns, grenades, a large amount of ammunition, money and unidentified drugs.

Syria has been in a state of civil war since 2011, with government forces fighting against numerous armed opposition groups and militant and terrorist organizations. Russia, along with Turkey and Iran, is a guarantor of the ceasefire regime in Syria.