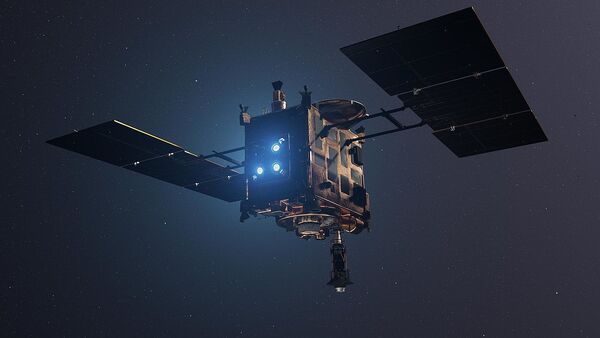 TOKYO (Sputnik) - The re-entry capsule of Japan's Hayabusa2 asteroid explorer containing samples from asteroid Ryugu will land in Australia on 6 December, as follows from a joint statement of the Japan Aerospace Exploration Agency (JAXA) and the Australian Space Agency (ASA) published on Tuesday.

"The statement acknowledges that the capsule of 'Hayabusa2' containing the asteroid samples will land in South Australia on 6 December 2020. JAXA and the Agency are working through JAXA’s plan for the re-entry and recovery of the capsule. The plan will be finalised by the issuance of Authorisation of Return of Overseas Launched Space Object (AROLSO) from the Australian government", the statement reads.

According to the statement, the capsule is expected to land in Woomera, South Australia state.

Ryugu, which is almost 1 kilometer (0.6 mile) in diameter, is currently over 300 million kilometers away from Earth. The asteroid is believed to contain water and organic chemicals that may help scientists uncover clues about the origins of terrestrial life.