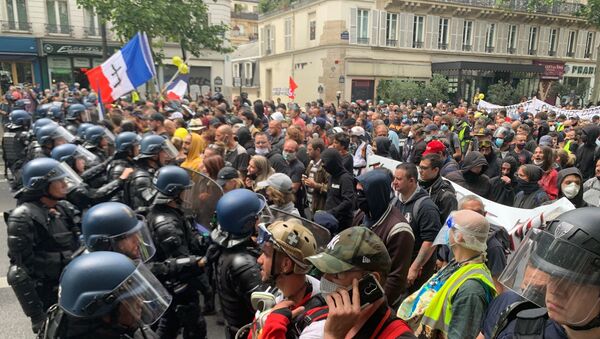 Subscribe
This comes in the wake of the country's cabinet reshuffle and the nomination of Jean Castex as the new Prime Minister. The reshuffle has been seen as part of measures initiated by President Macron to boost the country's economy affected by the coronavirus pandemic.

Watch a live broadcast from Place de la Republique in Paris on Tuesday, July 14, as hundreds of people take part in an anti-government protest following a call by the General Confederation of Labour union.

The protest is taking place on Bastille Day, the country's main national holiday, and shortly after the cabinet reshuffle and the nomination of Jean Castex as the new Prime Minister.

Members of the "Yellow Vests" movement are also taking part in the protest.

Clashes between police and some of the protesters have been reported, with police officers forced to use tear gas to disperse groups of aggressive demonstrators.

Public gatherings of more than 5,000 people are still banned in France amid the continuing coronavirus outbreak.