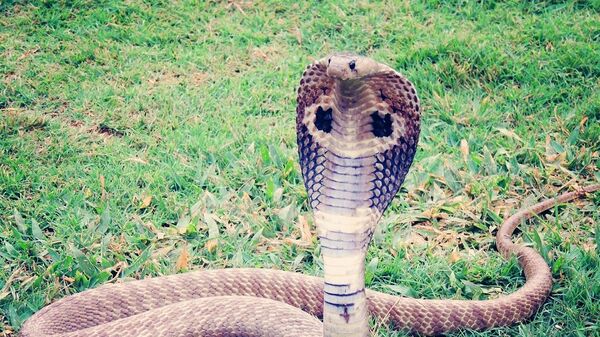 CC0 / /
Subscribe
International
India
Africa
New Delhi (Sputnik): The monsoon season has finally arrived in India after a months-long scorching summer. Along with rains, come the reptiles which are frequently being seen in residential areas and buildings. Recently, a giant monitor lizard was spotted in the capital Delhi.

A 15-foot-long king Cobra  entered a village in Coimbatore, Tamil Nadu. The forest department subsequently came to rescue the giant reptile and release it back into the wild.

A video of the incident shows the rescuer first picking up the cobra with his bare hands and placing it on a hook. The man then directs the snake to a bag but the cobra turns its head toward him with its venomous tongue sticking out. However, the man carefully places the snake in the bag. The video later shows it being released into the wilderness.

A rare 15-feet-long King Cobra rescued recently in a village near Coimbatore in Tamil Nadu. The snake was spotted in Narasipuram village in Thondamuthur, a suburb of Coimbatore city. It was later released into Siruvani forest area.#KingCobra #Coimbatore #TamilNadu #DY365 pic.twitter.com/NaAT3y6kOV

​Videos and pictures of the rescue operation have gone viral on social media, with netizens appalled over one of the pictures in which the snake is dangerously close to the rescuer’s foot.

Too close even for comfort. pic.twitter.com/BTx1xcdQCP