Trudeau Apologises for Not Recusing Himself From Charity Decision, Says to Stay on as PM 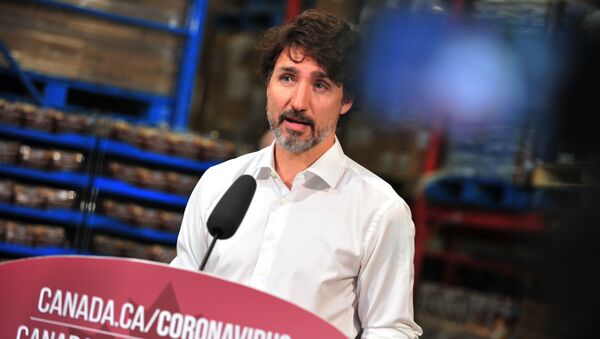 TORONTO (Sputnik) - Canadian Prime Minister Justin Trudeau apologised during a press briefing on Monday for not recusing himself from a controversial decision to award a government contract to a charity tied to his family, but indicated he has no plans to resign.

"I made a mistake in not recusing myself immediately from the discussions, given our family’s history [with WE Charity], and I am sincerely sorry about not having done that", Trudeau said.

The prime minister said he does not intend to step down and deputise Deputy Prime Minister Chrystia Freeland to lead government in the interim as has been suggested by Bloc Quebecois leader Yves-Francois Blanchet.

"I have my job to do… I will continue to work with an outstanding group of ministers, including the Deputy Prime Minister and we will make sure we stay focused on delivering for Canadians," Trudeau told reporters after being asked about Blanchet’s assessment.

Trudeau said that he was aware of his mother’s and brother’s speaking engagements and that he is not surprised they were remunerated by WE Charity, but added that he was unaware how much they got paid.

The prime minister reiterated that the decision to award the contract was recommended based on their public service.

Trudeau and Finance Minister Bill Morneau have incurred backlash after multiple investigative pieces revealed close ties between their families and the WE Charity, which was awarded a $670-million sole-source contract to administer a government-sponsored student volunteer program.

The revelations have prompted the official opposition Conservatives to call for a police investigation into the relationship between the Canadian government and the charity and to uncover which other cabinet members knew of the alleged wrongdoing.

An investigation by independent media outlet Canadaland revealed that Trudeau’s mother Margaret Trudeau and brother Alexandre Trudeau were paid a combined sum of $258,000 for speaking engagements at WE Charity events. Trudeau’s wife Sophie has also participated in a number of WE Charity events around the world.

Canadian media reported that WE Charity founders Craig and Marc Kleinberg have given donations to Trudeau and the Liberal Party of Canada.

Meanwhile, Canada’s Ethics Commissioner Mario Dion has already opened an investigation into whether any wrongdoing on the part of Prime Minister Justin Trudeau occurred in the decision to award the contract. The Office of the Conflict of Interest and Ethics Commissioner said in a statement to Sputnik on Friday that an investigation of Morneau has not been initiated, despite a call by at least one lawmaker to do so.

The investigation of Trudeau will be the third against him during his time in office. The prime minister was twice found in violation of conflict of interest rules for interfering in the investigation into corrupt practices by engineering giant SNC-Lavalin’s dealings in Libya and improperly accepting gifts or "other advantages" when visiting Aga Khan’s private island.