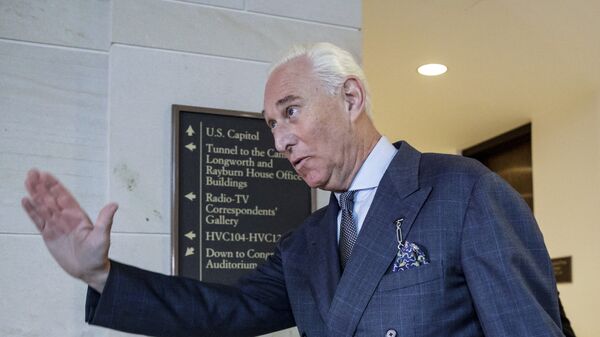 © AP Photo / Scott Applewhite
Subscribe
International
India
Africa
The president’s long-time ally and former adviser, who was sentenced to three years and four months in prison as part of the Russia probe for reportedly lying to Congress, said he would write a book in order to put to bed the myth that the Trump campaign colluded with Moscow to win the 2016 presidential election.

Donald Trump’s former political consultant Roger Stone said he would do "anything necessary" to re-elect the president, "short of breaking the law". The 67-year-old, who was granted clemency by Trump on 10 July, said that the incumbent president would win the presidential election in November, although he warned that it would be a "tough fight".

"He’s got three obstacles: voter fraud … internet censorship, which I have just recently experienced myself; and, of course, the constant falsehoods being pushed by the corporate-owned mainstream media. Those all make it a difficult race. But he [Trump] is a great campaigner. He is a great communicator", Stone told the news website Axios.

Commenting on Trump’s decision to commute his sentence, the president’s former adviser said that the decision shows that Trump has "an enormous sense of fairness and justice of mercy".

"Sending me to a prison where I could not be socially distanced would, I think, be a death sentence”, Stone said.

Trump’s decision to commute his sentence came a day after the court denied Stone’s request to delay the start of his three-year-and-four-month prison term because of the coronavirus crisis in the United States, where the disease has killed almost 138,000 people and infected some 3.4 million.

Trump’s move sparked anger among the Democrats, who have accused the president of eschewing the rule of law in order to protect his political ally. Trump said that the political consultant had been targeted in an illegal "witch hunt that never should have taken place", referring to the Russia probe, which looked into whether the Trump campaign had colluded with the Kremlin to influence the result of the 2016 presidential election but found no evidence of collusion.