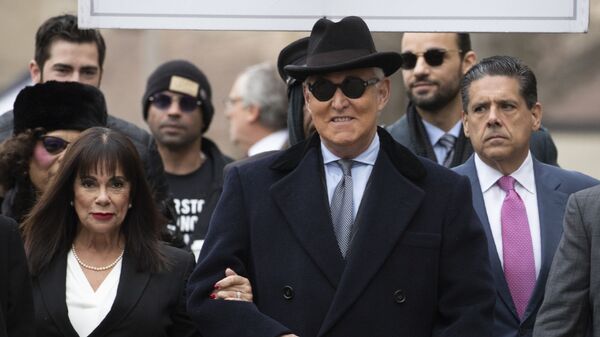 Tim Korso
All materialsWrite to the author
The US president commuted the sentence of his former campaign adviser Roger Stone on 10 July, calling the charges against him "unfair" and arguing that he had "already suffered greatly".

A US judge has ordered the government to clarify the recent clemency that President Donald Trump issued to political adviser Roger Stone, wondering whether it extends to include his supervised release. The judge, who presided over the case of the now pardoned former Trump campaign adviser, said the president's order was not clear on that aspect of his sentence.

Trump commuted Stone's sentence on 10 July, arguing that the man was convicted for his actions during the investigation into the Russiagate "hoax", despite the fact that Special Counsel Robert Mueller’s team failed to gather any evidence proving that he and the rest of the campaign had colluded with the Kremlin. Based on this, POTUS decided that Stone's sentencing was a "miscarriage of justice" and that he should be released, as he had "already suffered greatly".

Despite being convicted on seven counts that included obstruction of justice, perjury, and witness tampering back in November 2019, Stone failed to report to prison before being pardoned by the president. If not for the clemency, Stone would have spent almost 3.5 years in prison and would have been supervised for two more years after release.

Stone was convicted for allegedly pressuring some of the witnesses in the Russia probe to prevent them from testifying in Congress and for purportedly lying to investigators about his connections with WikiLeaks. His clemency has met with harsh criticism from the Democrats and from Special Counsel Robert Mueller, who led the Russia probe.

Mueller called Stone "a convicted felon, and rightly so" in a Washington Post op-ed, and defended the Russia probe, often referred to by Trump as a "witch hunt". Democrats, in turn, have accused Trump of abusing his powers by releasing his former adviser and friend, who they argue was convicted based on evidence of his wrongdoings.

In a rare display of defiance, some congressional Republicans have also chipped in with their own criticism of Trump's clemency. Mitt Romney and Pat Toomey have lambasted the president's use of his right to pardon criminals, calling it "unprecedented, historic corruption". POTUS snapped back, in turn, calling the two congressmen RINOs - "Republican in name only".