The first football World Cup was held in July 1930 in the South American nation of Uruguay. In its capital city of Montevideo, in the Estadio Centenario, the teams of 13 nations faced off to determine the best of the best. The final game, between the host country and Argentina, ended in a 4-2 victory for Uruguay and went down in sports history.

The mysterious number 13 features several times in the story of the first World Cup game. On 13 July 1930, 13 countries met in Uruguay and engaged in the first football World Cup, organised by the International Federation of Association Football (FIFA). Teams from Argentina, Belgium, Brazil, Chile, the US, France, Mexico, Paraguay, Peru, Romania, Uruguay, Yugoslavia, and Bolivia took part in the historic competition.

On 30 July, the host country won the final by scoring four goals against their Argentine neighbours. At that time, the football rivalry between Uruguay and Argentina was already a sports classic, and it made it an exciting match. Today, every time the two teams meet, football aficionados all over the world watch the game with baited breath. 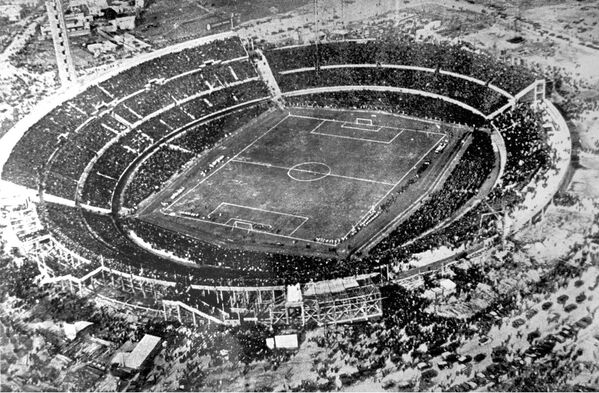 1/15
© AP Photo /
This archive photo from 30 July 1930 shows an aerial view of the Centenario Stadium in Montevideo, Uruguay. Uruguay scored a 4-2 win over Argentina in the World Cup Final. On 13 July 1930, the national teams played the first matches of the world championship: France beat Mexico 4:1, and the United States defeated Belgium 3:0. The games were played in other smaller stadiums in Montevideo. (AFP Photo) 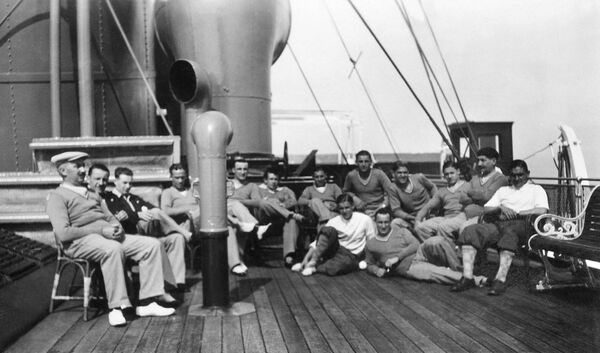 2/15
© AFP 2022 / STAFF
Players of the French national football team pose for a group photo after lunch on board the Conte Verde liner in July 1930 on their way to Uruguay to participate in the first World Cup. (AP Photo) 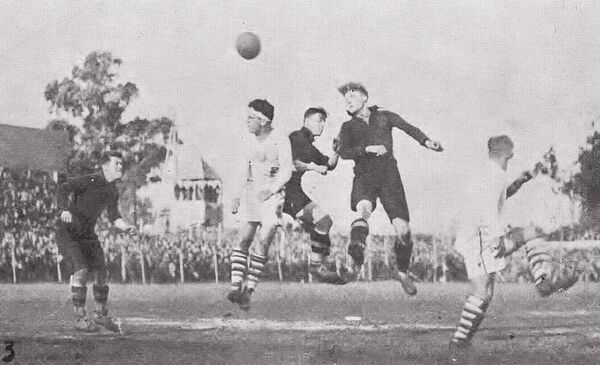 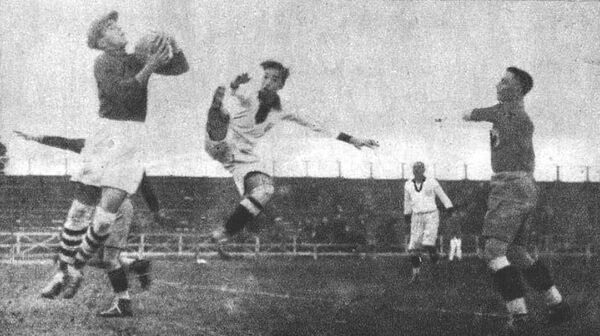 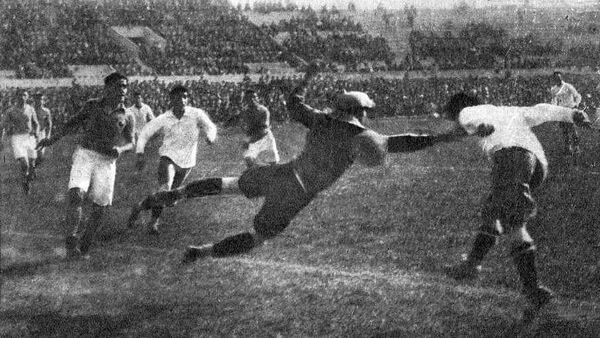 7/15
CC0 / /
Guillermo Subiabre scores the goal that gave Chile its victory over France at the 1930 World Cup. 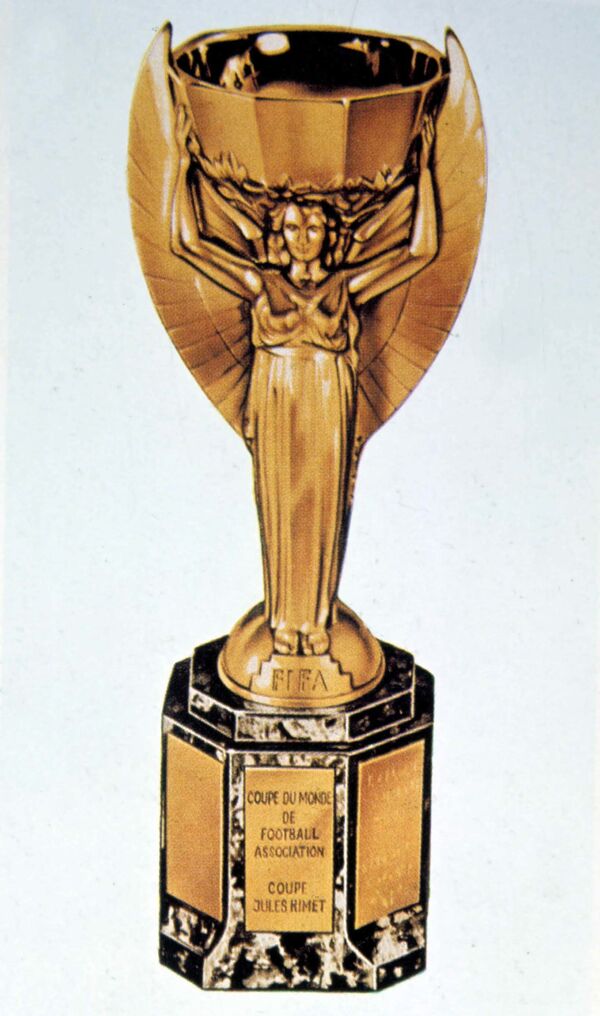 8/15
© AP Photo / Anonymous
Undated file photo of the Jules Rimet Cup, awarded to the winners of the World Cup Final; the game was held for the first time in Montevideo, Uruguay, on 30 July 1930. Uruguay defeated Argentina 4-2, and the winning team was awarded the Rimet Cup. (AP Photo) 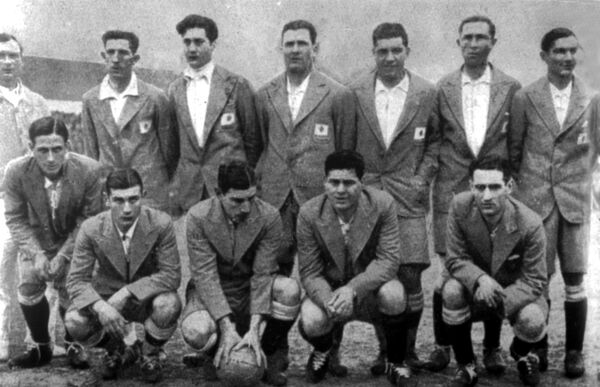 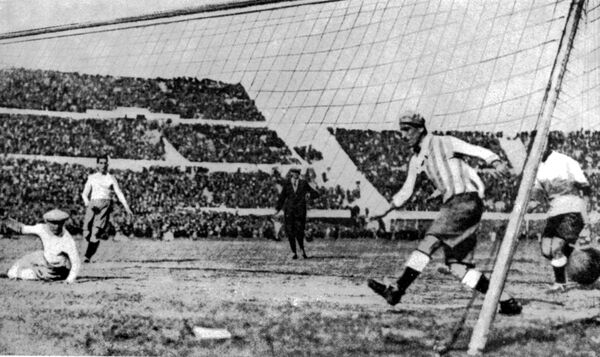 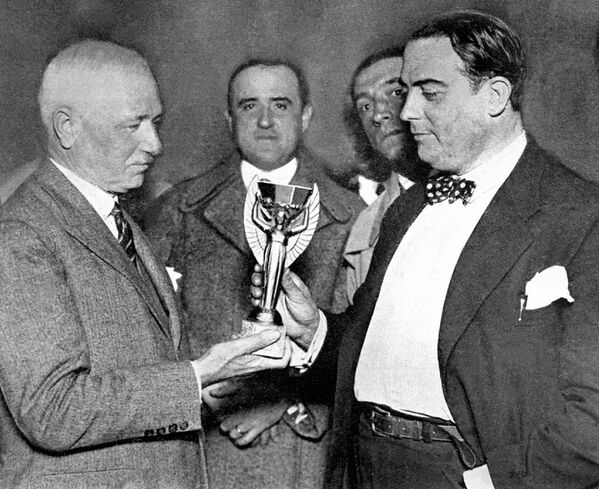 12/15
© AFP 2022 / STAFF
Frenchman Jules Rimet (left), head of the International Federation of Association Football (FIFA) presents the World Cup trophy to Dr. Raul Jude, president of the Uruguayan Football Association on 5 July 1930 in Montevideo. The trophy will be presented to the captain of the winner team of the first World Cup, organised in Uruguay on 13-30 July. 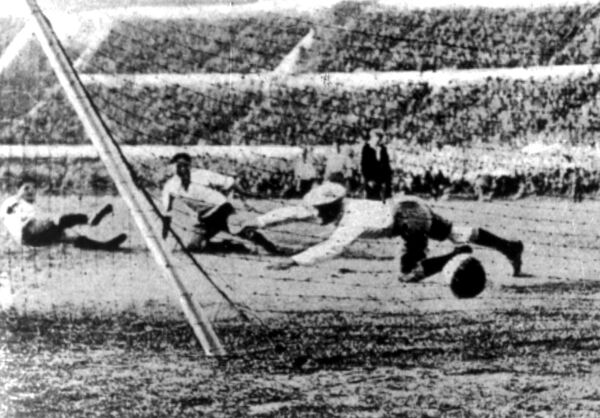 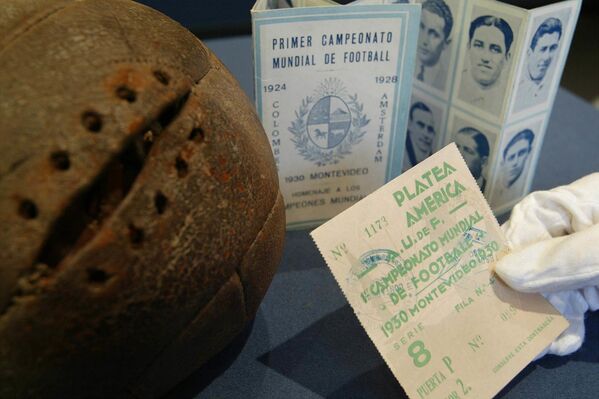 14/15
© AP Photo / Alastair Grant
The opening leather football from the World Cup Final (left) with a ticket to the final game (front) and a programme showing photos (back) of both teams at the Bonhams Auction House, 26 March 2003. (AP Photo) 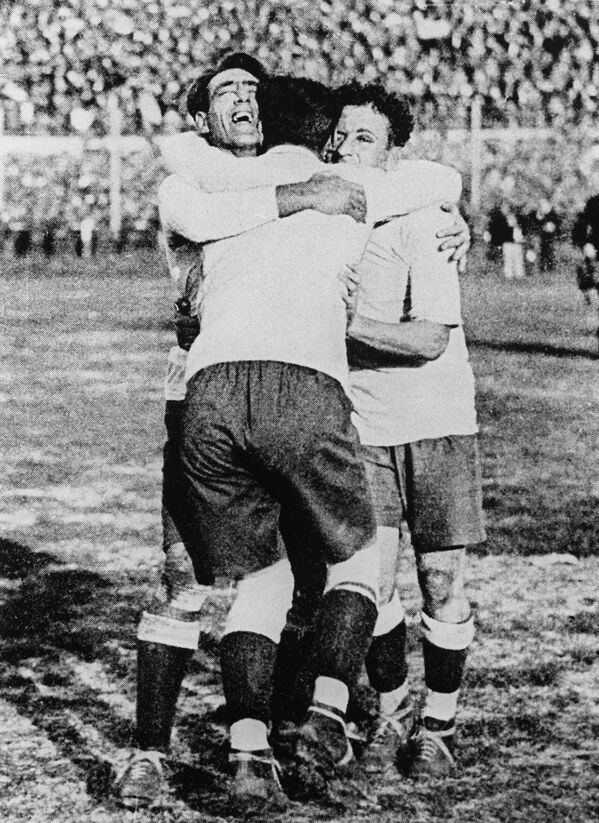 15/15
© AFP 2022 / STF
Uruguay's Pedro Cea, Héctor Scarone and Héctor Castro (left to rgiht) celebrate after Uruguay beat Argentina 4-2 in the first World Cup Final in Montevideo on 30 July 1930. (STF/AFP)
Newsfeed
0
Access to the chat has been blocked for violating the rules . You will be able to participate again through:∞. If you do not agree with the blocking, please use the feedback form
The discussion is closed. You can participate in the discussion within 24 hours after the publication of the article.
To participate in the discussion
log in or register
loader
Chats
Заголовок открываемого материала