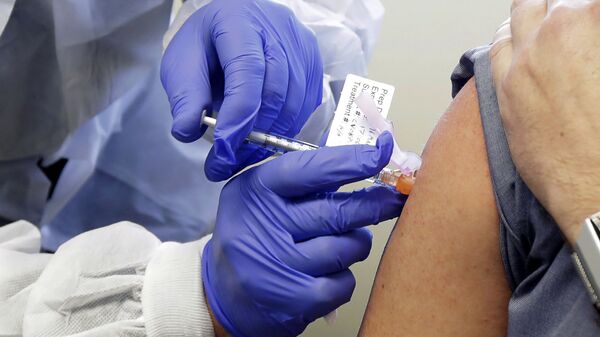 Lilia Dergacheva
All materialsWrite to the author
Researchers believe that the findings, based on the clinical records of 90 people, are virtually "a nail in the coffin" for so-called herd immunity theories, which suggest coronavirus flare-ups could be dealt with as soon as the lion's share of the world's population experiences the contagious disease.

People who have recovered from COVID-19 may not stay immune to the novel virus for long, according to new research by British scientists, suggesting people could contract it more than once and even repeatedly, year after year, like colds and flu, The Guardian wrote. The study has yet to be peer-reviewed before its official publication.

Blood tests that were looked into at King's College in London revealed that while 60% of people boasted the maximum "potent" antibody response during the peak of their battle with the infection, around three weeks after the its onset, only 17% retained the same indexes three months later.

The research was conducted on 90 patients and volunteering healthcare workers at Guy's and St Thomas' NHS foundation trust.

"People are producing a reasonable antibody response to the virus, but it’s waning over a short period of time and depending on how high your peak is, that determines how long the antibodies are staying around", noted Dr Katie Doores, lead author on the study at King's College London.

If antibodies take centre stage in the global war on the coronavirus, also a key predisposition in the ongoing work on coronavirus vaccines, the findings mean people could be infected again in seasonal waves and vaccines may not have a lasting effect.

The study found that antibody levels skyrocketed and stayed around longer in patients who had severe symptoms as they apparently churned out more antibodies to fight the infection.

There are four other types of coronaviruses in widespread circulation, which cause the common cold. "One thing we know about these coronaviruses is that people can get reinfected fairly often", said Prof Stuart Neil, a co-author of the study. "What that must mean is that the protective immunity people generate doesn't last very long. It looks like Sars-Cov-2, the virus that causes COVID-19, might be falling into that pattern as well".

As Professor Jonathan Heeney, a virologist at the University of Cambridge put it, these fresh findings, one of a kind in the field, "put another nail in the coffin of the dangerous concept of herd immunity".

Yet, Professor Arne Akbar, an immunologist at UCL, said antibodies are not the whole story, albeit a significant part of it. He cited growing evidence, that T cells produced to fight common colds can also protect people who battle the coronavirus. Those patients who fight the virus with T cells may not need to churn out high levels of antibodies but may cope without any further help, he added.

A string of countries have in the past few months embarked on global research and vaccine development projects, with Russia, the US, China, Germany, and the UK among those leading the effort.

Russia has now set about the final stage of testing a COVID-19 vaccine being worked on by the Gamaleya Scientific Research Institute of Epidemiology and Microbiology jointly with the Russian Defence Ministry. Participants in the clinical trials that started in mid-June showed an immune response to the coronavirus vaccine, which promises to give people protection against the virus for over two years, the ministry’s statement has it.