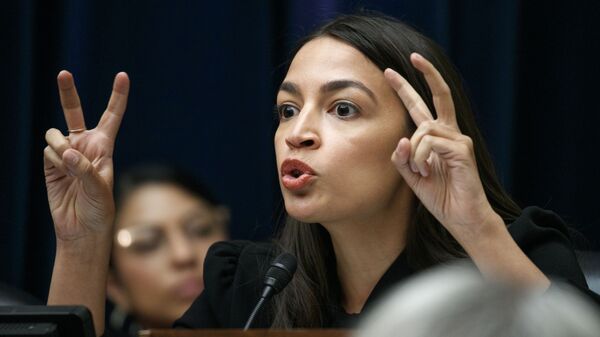 New York City has recently witnessed a surge in violent crimes, with more than 80 shootings registered just last week alone, according to the local police.

Congresswoman Alexandria Ocasio-Cortez thinks that unemployment is the reason for the spiking crime rate in New York City, because citizens are struggling to survive and feed their families.

"Maybe this has to do with the fact that people aren't paying their rent and are scared to pay their rent and so they go out, and they need to feed their child and they don't have money, so they feel like they either need to shoplift some bread or go hungry", she said in a virtual town hall meeting on Thursday.

AOC on increased NYC crime: "Maybe this has to do with the fact that people aren't paying their rent & are scared to pay their rent & so they go out & they need to feed their child & they don't have money so... they feel like they either need to shoplift some bread or go hungry." pic.twitter.com/oHSTWWJZ6a

It appears that many social media users do not share the congresswoman's opinion, with some of them saying that she is trying to present criminals as victims. Others pointed to the fact that AOC actually scrapped tens of thousands of jobs for New Yorkers after she and other Democratic lawmakers succeded in blocking Amazon's plans of building its second headquarters in the city.

she couldn't apply this argument to ppl who peacefully went to work to make money but she can apply it to criminals. you gotta be pretty naive to buy what aoc sells.

Guys look - the infamous grocery store “NikeTown” in Chicago is renown for their bread. They just wanna eat, give them a break. pic.twitter.com/CInkc0BU0E

A user shared camera footage showing a man and his child shot right in the street in NYC, implying that this was definitely not a struggling citizen looking for food.

He clearly just needed a loaf of bread to feed his family. Totally understandable.

The New York Police Department earlier reported a spike in gun violence in the city in recent times, for which the police blames bail reform and the release of about 2,500 inmates over fears of COVID-19 spread in NYC jails.

"We recommended 96 percent of that population not to be released, it was ignored and now we have more victims and we see the lawlessness on the streets", said NYPD Chief of Crime Control Strategies Michael LiPetri.

On Saturday, at least 15 shootings were reported in the media. Last week, the July Fourth weekend ended up with 44 shootings, in which at least 8 people were killed.