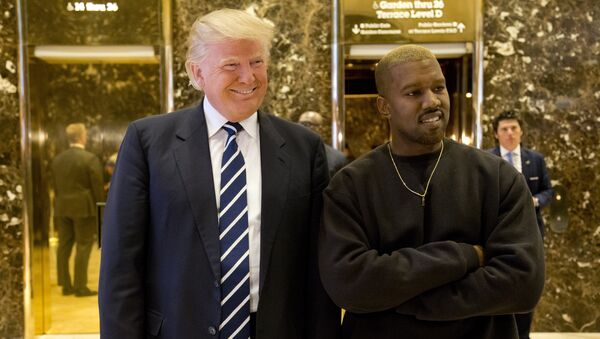 Oleg Burunov
All materialsWrite to the author
On Thursday, Donald Trump voiced hope that Kanye West would support him in the presidential election race even though the famous rapper earlier signaled his unwillingness to do so.

“That shouldn’t be hard. Corrupt Joe has done nothing good for Black people!”, POTUS tweeted on Saturday when commenting on a report, in which a Trump campaign advisor discussed the hip-hop icon stealing the black vote from Biden.

Twitter users were immediately there, with many blaming the US president for being corrupt himself and urging him to resign.

Do you study for your cognitive test?

who is calling whom corrupt? Get real donald, get real!

“Who is calling whom corrupt”, one user noted, while another netizen wondered whether Trump “studied for the cognitive test”.

Some, however, supported Trump, praising him as the “best president ever” and lambasting Biden’s “corrupt agenda”.

My life has improved greatly since you've been in office. I'm no longer homeless, I have improved my credit and I'm off food stamps. Looking forward to another 4 years! #BlacksForTrump

Biden does not connect with the American people!

Biden and his corrupt agenda is not embraced by the voter!

One netizen suggested that as far as West is concerned, he “just wants publicity” when it comes to his decision to run for the presidency.

Kanye West just wants publicity. But thanks for letting the black community know what he might be up to so they know not to vote for him.

Trump’s remarks came after he told Fox News that he hopes the famous rapper would back the president's November election campaign.

This was preceded by the rapper’s interview with Forbes, during which he confirmed his intention to enter the election race and made it clear that he doesn’t back Trump. West previously signalled his support for Trump, meeting the president in the Oval Office in October 2018.