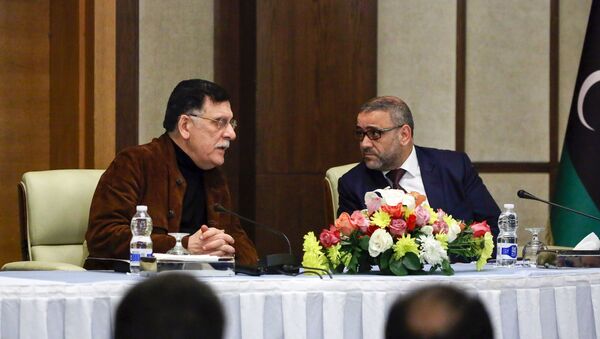 © AFP 2021 / MAHMUD TURKIA
Subscribe
MOSCOW (Sputnik) - Libya’s High Council of State, an advisory body based in Tripoli, has reelected Khalid Mishri as its chairman for a third consecutive term.

"Today, on Sunday, the High Council of State held its 54th meeting, which was dedicated to the election of the head of the council, in a democratic atmosphere. Khalid Mishri won in the first round …. receiving 73 votes out of 132", the council wrote on Facebook.

The council was founded as a consultative body under the Government of National Accord (GNA) in 2016. Mishri has been in the office since April 2018. The official is a member of the Justice and Construction Party, affiliated with the Muslim Brotherhood (a terrorist group, banned in Russia).

Since the overthrow and murder of its long-time leader Muammar Gaddafi, Libya has been split between two rival administrations, the UN-recognized GNA, backed by Turkey, and the Tobruk-based parliament, supported by the Libyan National Army and Egypt.

In early June, Egypt put forward the Cairo peace initiative, outlining a path for a political settlement in Libya and calling for warring parties to cease fire since 8 June. The proposal was welcomed by the Arab League, Russia, Saudi Arabia and the United Arab Emirates, but was rejected by the GNA and Turkey.

000000
Popular comments
Totally IRRELEVANT!! Especially since the GNA is an illegitimate organ having lost their temporary mandate a couple of years ago. The GNA and all their underlings should be wearing Turkish and ISIS flags on their bodies, assuming they don't already!!
Dang!
12 July 2020, 21:25 GMT1
000000
His time expired over two years ago. GNA was only supposed to be in place for one year. But, like all politicians, they got used to the power and money and have decided to stay. Instead of uniting their country under the duly elected government in the east.