At Least 21 Injured in Blaze on Board Ship at San Diego Base - Photos, Videos 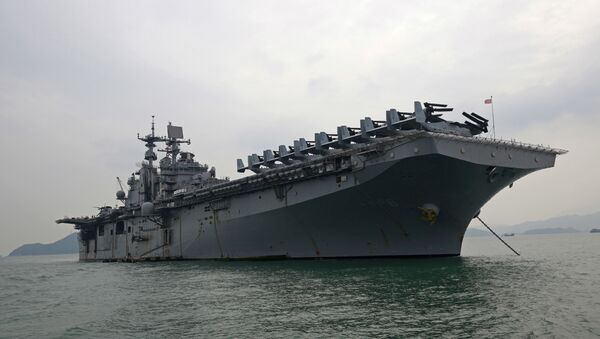 Firefighters battled a blaze on board the USS Bonhomme Richard at a naval base in San Diego on Sunday, local media reported. The ship caught fire early on Sunday and an explosion occurred on board.

At least 21 people, including four civilians, were injured amid the fire, the Naval Surface Forces of the US Pacific Fleet said.

Seventeen Sailors and four civilians are being treated for non-life threatening injuries at a local hospital. All inport ships have been contacted and directed to provide fire parties to possibly assist with firefighting efforts.

According to images circulating online, several fireboats were deployed to extinguish the flames, which was concentrated in the centre portion of the vessel. An explosion was also heard on board the ship prior to the blaze, according to domestic media reports.

Explosion with at least one injury at the USS Bonhomme Richard. #shipfire pic.twitter.com/HooWIRcjU4

The cause of the blaze was not immediately clear, while the San Diego Police Department has not responded for a comment.

SDFD & Federal Fire have unified command for what sounds like a below deck fire, possibly in a hanger bay

Initial reports of an explosion & injuries.

As both a fireman & a sailor, thoughts with all aboard. pic.twitter.com/eDnLBYZ2SA

​The WFLA television station said earlier that several sailors were being treated for various injuries, besides the one who was wounded in the explosion.

San Diego Fire-Rescue (#SDFD) is assisting on A fire on board the #USS Bonhomme Richard.

Several sailors are being treated for a variety of injuries.
According to a witness, an explosion was heard coming from the ship shortly after the blaze started. pic.twitter.com/b5vYoTzIdK

All crew members have safely evacuated the vessel and all are accounted for, the naval fleet said in an earlier Tweet.

The USS Bonhomme Richard was commissioned in 1998 and spent six years in Japan as part of the US Navy’s Forward Deployed Naval Force in the region.