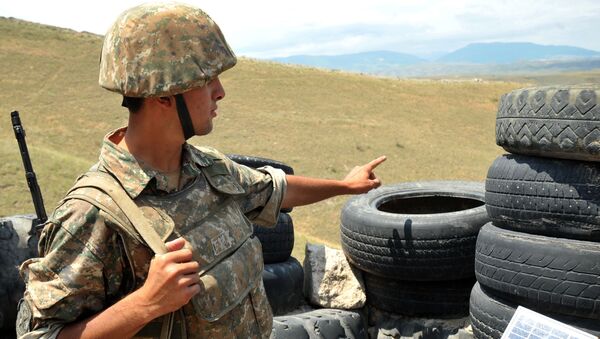 BAKU (Sputnik) - Armenian military opened fire at the border with Azerbaijan on Sunday, provoking clashes that resulted in losses on both sides, the Azerbaijani Defence Ministry said on Sunday.

"Starting from the afternoon on 12 July, units of the Armenian armed forces, grossly violating the ceasefire on the direction of the Tovuz region of the Azerbaijani-Armenian state border, subjected to fire … our positions using artillery mounts. There are losses on both sides", the ministry said in a press release, published on its official website.

Separately, the press service said that two Azerbaijani servicemen have been killed, and five others have sustained injuries.

"As a result of adequate measures, the enemy suffered losses and retreated", the press service added.

The conflict between Baku and Yerevan over Nagorno-Karabakh began in February 1988, when the Nagorno-Karabakh Autonomous Region announced its secession from Azerbaijan. During the 1992-1994 armed conflict, Azerbaijan lost control of Nagorno-Karabakh and seven surrounding areas. Since 1992, negotiations have been ongoing for a peaceful resolution to the conflict within the framework of the OSCE Minsk Group, led by co-chairs Russia, the United States, and France.