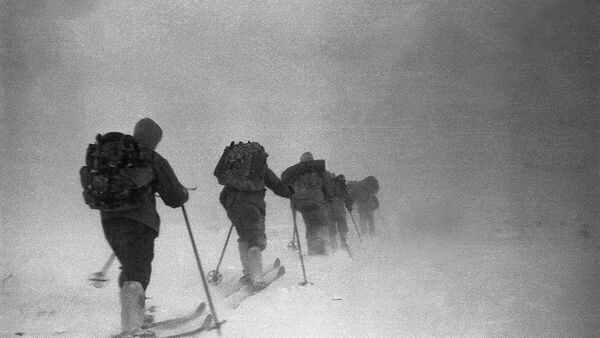 The mysterious circumstances surrounding the tragic incident that occurred in February 1959 sparked many theories and the issue has become the subject of numerous books, documentaries, and movies.

An investigation has found the answer to the mystery of the Dyatlov Pass incident, said Andrey Kuryakov, deputy head of the prosecutor’s office in Russia’s Ural Federal District. The prosecutor’s office launched another investigation into the incident at the request of the relatives of the victims as well as due to heightened interest from the public and mass media. The investigators carried out nine expert examinations at the site of the tragedy in order to find out what the reason was behind the tragic incident. They concluded that the Dyatlov group died because of an avalanche and poor visibility.

"The group left the tent and went 50 metres away from it to hide behind a ridge of stones, a natural avalanche suppresser. They did everything right. But there is another reason why the hikers were doomed – poor visibility. When they decided to return to the tent, they couldn’t see it as visibility was about 16 metres, while they were 50 metres away from the tent", said Kuryakov.

The deputy head of the prosecutor’s office said that expert examination had confirmed that it was impossible for them to find their tent with their eyes closed, even if they knew in which direction it was located. "They started walking down the mountain, made a fire and then attempted to get back to the tent, but froze to death, because the temperature was minus 40-45 degrees Celsius", he said.

In 1959, Igor Dyatlov, a 23-year-old student at the Radio Engineering Department at Ural State Technical University, formed a group of experienced hikers for a skiing expedition across the northern Urals. The goal was to climb Kholatchahl Mountain, also known as Dead Mountain or Otorten Mountain. Their expedition was a category three, meaning it was the most difficult.

On 12 February, the group, consisting of seven male and two female skiers – Igor Dyatlov, Yuri Doroshenko, Lyudmila Dubinina, Georgiy Krivonischenko, Alexander Kolevatov, Zinaida Kolmogorova, Rustem Slobodin, Nikolai Thibeaux-Brignolles, and Semyon Zolotaryov, was supposed to return from the expedition to the village of Vizhai. However, this did not happen and a search and rescue mission was launched a few days later. At the end of the month, rescuers discovered the group’s abandoned tent on Dead Mountain and saw that it had been cut open from the inside. There were nine sets of footprints left by people who were either only wearing socks or were barefoot. They then found the bodies of five hikers, two of whom were wearing nothing but underwear.

It took two months to find the other four hikers. The rescuers discovered them under four metres of snow in a ravine. The investigators said some of the hikers were wrapped in torn clothes, which suggested that they took them from their dead companions. After examining the four bodies, the investigators were left baffled.

Three of the bodies had sustained fatal injuries – Nikolai Thibeaux-Brignolles had a skull injury, while Lyudmila Dubinina and Semyon Zolotaryov had chest fractures. The force required to cause such chest injuries was comparable to that of a car crash. In addition, Zolotaryov had his eyeballs missing, while Dubinina was missing her tongue and lips. The inquest ended that same year, with investigators saying that six of the hikers had expired due to hypothermia, while the three others died as a result of physical trauma. All the deaths were ruled an accident.

The mysterious circumstances surrounding the death of the Dyatlov group have inspired many theories, including that the hikers were attacked by a Yeti, wild animals, or were killed by a Soviet secret weapon. Other versions suggest that the group left the tent because of an infrasound-induced panic attack, katabatic winds, or a combination of all the theories. The Dyatlov Pass incident has been the subject of numerous books and films.