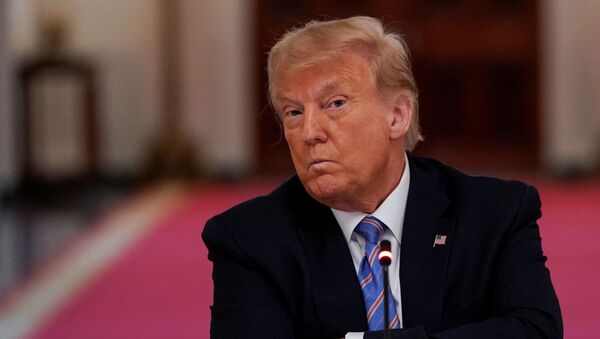 © REUTERS / Kevin Lamarque
Subscribe
Speaking about health check-ups ahead of the November polls, Trump bragged about his "unbelievable" results in cognitive testing, insisting his rival Joe Biden would fail it if he took it.

President Donald Trump said in an interview with Fox News’ Sean Hannity that he recently took a cognitive test and "aced" it, inviting Joe Biden, his Democratic rival in the upcoming presidential vote, to take the "same test".

He specified that he underwent the check-up at the Walter Reed Medical Center, but didn't mention the type of cognitive test he took.

"I actually took one, very recently, when I was – you know, the radical left was saying, 'Is he all there? Is he all there?'" he said. "And I proved I was all there, because I aced it. I aced the test", POTUS reiterated, adding the doctors were absolutely surprised.

"They said, 'that's an unbelievable thing, rarely does anybody do what you just did'", Mr Trump added.

The president, aged 74, and Biden, who is 77, have both traded barbs regarding each other's mental fitness. Trump suggested Biden didn't want to debate him and that the former vice president "couldn't pass" a cognitive test, claiming in the same interview that the test Biden is known to have taken was more likely a COVID check-up than a cognitive one.

Last month, when asked about his own cognitive potential the presumptive Democratic candidate said he was "constantly" being tested.

As for POTUS's results, his doctor's statement from 3 June says that a "periodic physical exam" indicated he "remains healthy", with no visible changes since his previous check-up. The statement did not specify whether cognitive screening was also included. In 2018, Trump took a test called the Montreal Cognitive Assessment (MoCA), which is "a cognitive screening test designed to assist Health Professionals in the detection of mild cognitive impairment and Alzheimer's disease", as per its website.

Sample questions from the exam include drawing a clock with the hands at a certain point of time, naming pictures of animals, and pronouncing a list of numbers forwards and backwards, a test on language fluency, and memory for words, etc. A score above 26 out of the 30 possible questions is considered normal. Trump scored 30 out of 30 at the time, according to Fox News.

000000
Popular comments
And there was a second part - colouring little farm animals with crayons and filling in the missing letters of their names! I think he aced that as well. Wow... Drumpf is sooooo clever!!!!