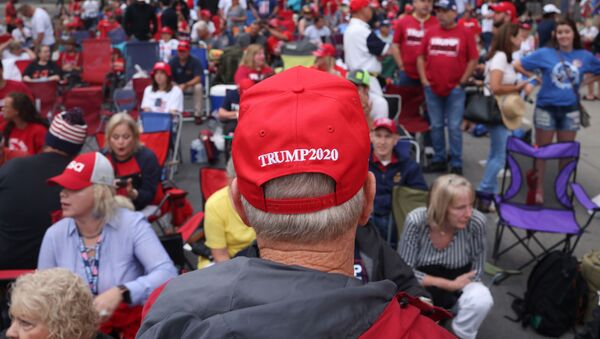 © AFP 2021 / WIN MCNAMEE
Subscribe
Staffers in US President Donald Trump’s campaign office in Arlington, Virginia, have their own loose COVID-19 rules, which involve not wearing masks inside the office as well as publicly joking about and downplaying the pandemic’s threat, insiders recently told Politico.

According to the individuals, who requested anonymity, Trump campaign staffers are instructed to wear masks outside the office in case they are seen by reporters, but they are told it’s acceptable to not wear masks inside the office. In addition, staffers routinely joke about the risk of infection.

“You get made fun of, if you wear a mask,” one person told the outlet. “There’s social pressure not to do it.”

The individuals who spoke to Politico also revealed that the office culture discouraged staffers from telling others whether they were exposed to COVID-19. Instead, staffers were encouraged by campaign officers to discreetly self-quarantine if they thought they had been exposed to the virus. In addition, there are no temporary barriers between desks at the headquarters and no social distancing guidelines, Politico reported.

This week, the campaign office was shut down and cleaned with disinfectants, an indication that the coronavirus may have been present in the building. According to three people with knowledge on the matter, the campaign’s headquarters is usually packed with dozens of staffers sitting close together.

The shut down came after campaign fundraiser Kimberly Guilfoyle - the girlfriend of Donald Trump Jr., the US president’s eldest son - tested positive for COVID-19 last week. A source told Politico that she did not frequently visit the building, however.

Guilfoyle traveled as part of the presidential team for Independence Day celebrations in South Dakota, where Trump held a rally. However, she did not attend the event after receiving the positive test result, the New York Times reported.

The Trump campaign’s lack of COVID-19 preventive measures became apparent during US Vice President Mike Pence’s visit to the headquarters last month, during which he posed for  a photo with more than 70 staffers without wearing a mask.

Pence, who uploaded the photo on Twitter and then later deleted it, was blatantly breaking Virginia’s guidelines, which advise employees to “utilize face coverings” and attempt to maintain 6 feet of physical distance from one another. The guidelines also stipulate that if social distancing is not feasible, “employers should provide face covering to employees.”

“The governor’s office did not want to get bogged down in a political fight,” one individual familiar with the matter told Politico. “They basically ducked a fight with the administration over this.”

000000
Popular comments
So that's how Trump tops the list in the number of corona deaths . He is not making America great , he is making America lifeless .