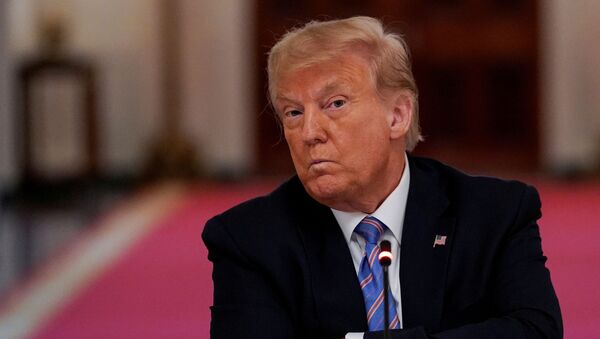 © REUTERS / KEVIN LAMARQUE
Subscribe
International
India
Africa
Trump has won yet another round of the political battle with his opponents as the Supreme Court hasn't green-lighted Congressional access to the president's tax returns, say US observers.

The Supreme Court's two rulings with regard to Donald Trump's tax returns have left the president's opponents with mixed feelings: on the one hand, it rejected Trump's lawyers' claim that he enjoys total immunity while in office; but on the other hand, it put on hold the Democratic-controlled House's effort to get the president's tax returns.

"We are pleased that in the decisions issued today, the Supreme Court has temporarily blocked both Congress and New York prosecutors from obtaining the President’s financial records," tweeted Trump's personal attorney Jay Sekulow. "We will now proceed to raise additional Constitutional and legal issues in the lower courts."

Is Trump Obliged to Release His Tax Returns?

To date, Trump has been repeatedly accused of being one of the only presidents in US modern history who have not released their tax returns.

"As a general matter, it is not mandatory for US Presidents to release their tax returns or personal financial information," explains Leandra Lederman, the William W. Oliver Professor of Tax Law at Indiana University. "There is a tradition of US presidential candidates releasing their returns but that is just a tradition, not a law."

The Democrats have sought Trump's tax documentation since the time of the 2015/2016 election cycle, citing, in particular, alleged hush payments made by Trump's former lawyer Michael Cohen to adult film star Stormy Daniels and ex-Playboy model Karen McDougal during the presidential race. Both women claimed that they'd had an affair with Trump, something that he vehemently denied.

If they were made from money raised amid the race, these hush payments could violate campaign financing laws. An inquiry into the matter is being conducted by Manhattan District Attorney Cyrus Vance who, according to the Court's ruling, may potentially obtain Trump’s business records and tax returns, though the information cannot be made public anytime soon. Meanwhile, both cases were sent to the lower courts.

"The US Supreme Court remanded to the lower courts both Trump v. Vance and Trump v. Mazars", Lederman notes. "The timing of those court proceedings isn't determined by politicians."

The president's personal attorney Jay Sekulow has recently announced that the Trump defence team "will now proceed to raise additional constitutional and legal issues in the lower courts."

Trump's opponents in the US Congress shouldn't hold their breath in expectation of getting Trump's returns anytime soon, although the Supreme Court rejected the president's immunity from responding to subpoenas, notes John Eastman, the Henry Salvatori Professor of Law & Community Service at Chapman University's Fowler School of Law.

"Instead of ordering the production of the records, the Court remanded the case to allow the President to raise the ordinary defences to subpoenas that any citizen might raise," the law professor highlights.  "And it allowed for one additional defence – if the prosecution appears to be politically motivated and designed to thwart the president in the conduct of his duties, as might well be the case with the New York grand jury effort, then the Supremacy Clause of the Constitution might well prevent enforcement of the subpoena."

Explaining the Court's decision to reject Congress’s claim of unfettered access, Eastman specifies that while "Congress can obtain even a President’s personal financial records if necessary for lawmaking purposes, but has no authority to seek those records for law enforcement purposes."

"Whether Congress can meet that test is what the lower courts will now be required to consider on remand – so again, no order that the records be produced at this point," the academic emphasises.

House Democrats have long been after Trump, starting with their endorsement of Special Counsel Robert Mueller's longstanding inquiry into the Trump campaign's alleged "collusion" with the Russians, which found no evidence to back the assumption, and ending with their impeachment effort that ended up in nothing as the Senate acquitted the president. Commenting on the latest court decision, the president called the attempts to get access to his tax returns a political "witch hunt".

​Trump Still Has the Backing of His Base

Regardless of continuous attacks from the Democratic camp and certain Republican senators' attempts to display their independence from the president, Trump remains very popular with his base, according to Republican donor Dan Eberhart, CEO of energy company Canary LLC.

The donor highlights that there’s not a lot of room for dissent Republicans to manoeuvre in.

"Trump is still Republicans' best hope to achieve their policy goals," Eberhart points out. "He is far more likely to focus on the economic recovery and regulatory reforms than Biden. There’s little disagreement that Biden’s agenda would be far more progressive – and expensive – than the Republicans'. President Trump has taken over the Republican brand for the time being."