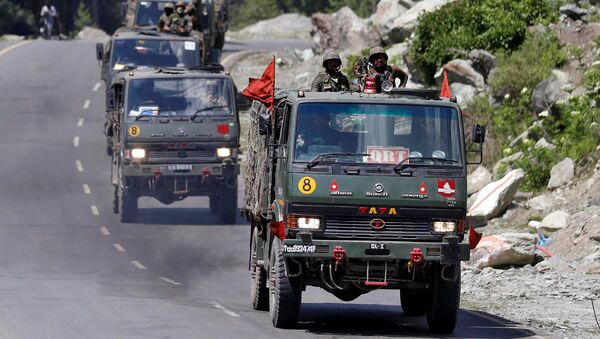 New Delhi (Sputnik): The two south Asian foes, India and Pakistan, at odds over Jammu and Kashmir since independence, have been accusing each other of constant ceasefire violations across the Line of Control (LoC). In the latest developments, India lodged a protest with Pakistan for 14 deaths in cross-border firing between the two countries.

One Indian Army soldier was killed on Friday in an ongoing exchange of fire in the Nowshera sector of Jammu and Kashmir between India and Pakistan. The Indian Army accused Pakistan of violating the ceasefire agreed upon in 2003 concerning the Line of Control (LoC), the de-facto border dividing the two nations, and launched retaliatory fire.

The Indian military claimed there has been firing and shelling by Pakistani troops since midnight in which an army jawan received serious splinter injuries and later succumbed to them in hospital.

Government data suggests that this is the sixth soldier lost in cross-border fire over the last month.

On Wednesday, the Indian side also reported one civilian casualty and injuries to two others in cross-border fire by Pakistan in Kashmir’s Balakote sector.

India and Pakistan have been accusing each other of ceasefire violations along the LoC in contravention to an agreement enacted by the two sides in 2003.

On 6 July, Pakistan claimed five civilians including two boys were injured in unprovoked ceasefire violations by India in the Nikial sector along the LoC and so retaliated.

​India lodged a strong protest with Pakistan on 3 July over 14 deaths this year in more than 2,400 unprovoked ceasefire violations by the Pakistani Armed Forces (PAF).

"To June this year, 14 Indian nationals have been killed and 88 more have been injured in more than 2,432 unprovoked ceasefire violations carried out by the Pakistan forces", said army sources on 3 July.

Last month, India alleged that Pakistan had violated the ceasefire over 2,000 times this year, while Islamabad blamed India for violating the ceasefire 957 times during the same period.

India and Pakistan have accused each other of violating the ceasefire and targeting civilians in cross-border firefights. The two countries have been fighting over Kashmir for the last seven decades and have traded accusations of sponsoring terrorism. Diplomatic ties between New Delhi and Islamabad deteriorated when India revoked the special status of Jammu and Kashmir in August 2019.