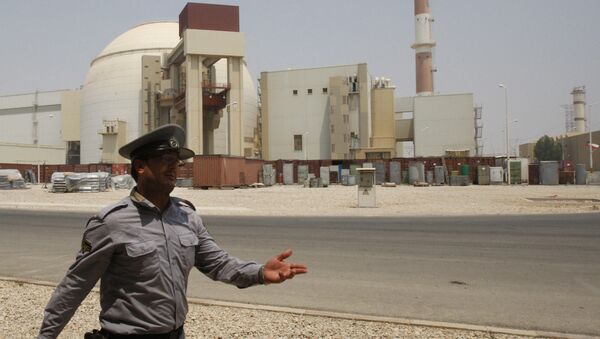 Oleg Burunov
All materialsWrite to the author
The crisis around Tehran’s atomic programme resumed in 2018 after President Donald Trump announced America's unilateral withdrawal from the 2015 Iran nuclear deal, also known as the Joint Comprehensive Plan of Action (JCPOA).

The German federal domestic intelligence service BfV has claimed that last year, the Iranian government made efforts to secure goods for its nuclear programme, The Jerusalem Post reports.

A BfV report seen by the newspaper disclosed that in 2019, the German intelligence agency “was only able to find occasional indications of Iranian proliferation-related procurement attempts” pertaining to the Islamic Republic’s atomic programme.

“Such indications arise when the methodological approach to the procurement of goods, [and] their application also in a nuclear programme and/or available knowledge about the final recipient respectively to the inquiring point indicate a potential procurement background relevant to proliferation”, the report argued.

At the same time, the BfV admitted in the document that "as far as verification of these indications was possible, they did not provide any evidence of a violation of the JCPOA [Joint Comprehensive Plan of Action, also known as the 2015 Iran nuclear deal] in Germany".

The report did not clarify whether Iran's nuclear proliferation-related findings were sent to the UN Security Council, the JCPOA signatories, and the International Atomic Energy Agency (IAEA) for review.

The document’s disclosure comes after Iranian President Hassan Rouhani stated in late June that Washington should compensate for its exit from the JCPOA, urging European countries, trying to salvage the deal, to oppose US pressure.

“We have no problem with talks with the US, but only if Washington fulfills its obligations under the nuclear deal, apologises, and compensates Tehran for its withdrawal from the 2015 deal", Rouhani pointed out.

In a separate development last month, Iranian Foreign Minister Mohammad Javad Zarif tweeted that the US has not only violated the Iran deal and “bullied” others into doing the same, but also earned the “dishonour of being the first” nation “in UN history to punish law-abiding countries for NOT violating a Security Council resolution”.

He referred to Resolution 2231, a UN measure to approve the JCPOA which, in particular, offered Tehran sanctions relief in exchange for a commitment not to pursue the production of nuclear weapons.

The crisis around the Iranian nuclear programme, which Tehran says is purely peaceful, resumed on 8 May 2018, when the US unilaterally withdrew from the JCPOA, agreed upon by Iran, the UK, France, Germany, Russia, China, and the EU in 2015.

The nuclear deal was set to limit Iran's stockpile of medium-enriched uranium and reduce its number of gas centrifuges in exchange for relief from economic sanctions.

Apart from leaving the JCPOA, the Trump administration also reinstated crippling economic sanctions on the Islamic Republic, prompting Tehran to call upon other signatories to stick to the agreement and safeguard the Iranian economy from a US blockade.

Tehran said that otherwise it would start gradually suspending its obligations under the deal every 60 days, a pledge that Iran started to implement in May 2019. The US exit from the JCPOA sparked tensions between Tehran and Washington, which escalated in early January 2020, when top Iranian general Qasem Soleimani was killed in a US drone strike in Baghdad, authorised by President Trump.