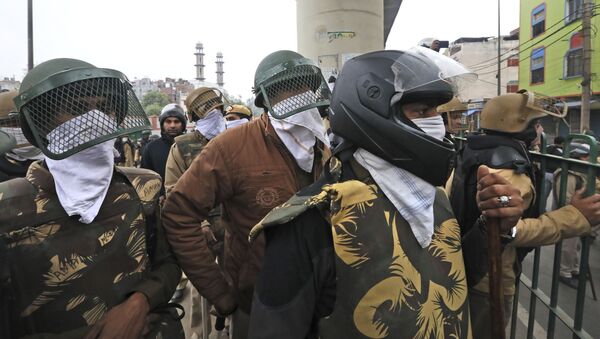 © AP Photo / Manish Swarup
Subscribe
New Delhi (Sputnik): Nearly five kilos of gold were seized in a diplomatic bag by Indian customs who arrested a former employee of the UAE Consulate over his alleged involvement in the incident. The Kerala state government came under fire when a woman working in the state's IT Department was removed soon after her name featured in the case.

A massive protest by the opposition has rocked the Indian state of Kerala demanding State Chief Pinarayi Vijayan step down from his post over his staff's alleged involvement in the smuggling of gold through diplomatic channels.

The police used tear gas and water cannon to disperse the members of the youth wing of the Indian Union Muslim League in Kerala who staged a protest in Kochi, Kozhikode, and outside the state chief's ancestral house in Kannur.

​Several protesters were injured when the police resorted to baton charging and the use of water canons to disperse them. The state's opposition party has alleged that a "criminal gang" is operating inside the state chief's office or CMO (Chief Minister's Office).

The office came into the spotlight after a woman named Swapna Suresh, an employee in Kerala's Information Technology Infrastructure Limited, was immediately sacked after her name appeared in the case. The woman, however, has stated in her anticipatory bail that she is being falsely implicated.

Similarly, M. Sivasankar, the principal secretary to the state chief, known for his close ties with the accused woman, was also sacked for "complicity" in the case.

While the state chief has denied any involvement in the affair, he has written to Indian Prime Minister Narendra Modi asking him to launch a probe into the incident.

Meanwhile, the central government has ordered the National Investigation Agency (NIA) to conduct a probe into the gold smuggling case.

Nearly 30 kilograms of gold concealed in diplomatic bags were seized from air cargo consignments from the United Arab Emirates by customs officials at the Thiruvananthapuram Airport in Kerala. The cargo was addressed to a former employee of the UAE Consulate in Kerala.

The UAE mission has categorically rejected allegations of involvement of any of its diplomats in the case.