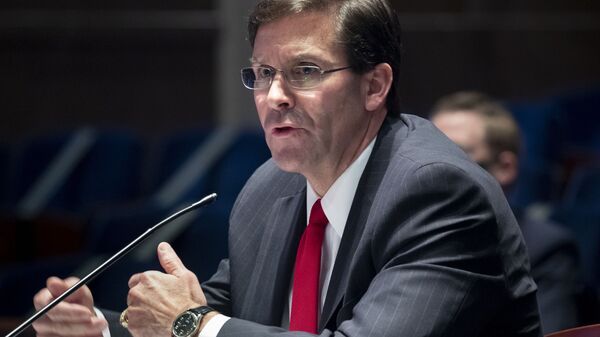 © AP Photo / Michael Reynolds
Subscribe
Ilya Tsukanov
All materialsWrite to the author
The New York Times' story citing 'anonymous intelligence' on alleged Russian cash rewards to Taliban*-linked militants for the killing of US and coalition troops in Afghanistan sparked a major scandal in Washington, prompting denials from the White House, Moscow and the Taliban itself, and demands by Democrats for new sanctions against Russia.

The Pentagon has ordered a probe investigating the leaks to media of intelligence about the so-called Afghan bounties story, Defence Secretary Mark Esper has confirmed.

Commenting on the bounty allegations themselves, Esper said that "all the defence intelligence agencies have been unable to corroborate that report."

Asked if he personally had received any intel briefing containing the words 'bounty' and 'Russians', the defence secretary said he he could not, to the best of his recollection, recall doing so.

"If it was a credible report, that's important, a credible, corroborated report that had used those words, certainly it would have been brought to my attention by the chain of command, by the chairman of the joint chiefs and others for action," Esper said. "We would have taken upon that action in an inter-agency effort to make sure that we addressed it. At all times, we take force protection very seriously and take all those actions, regardless of the credibility of the report, we take all that seriously."

Since its publication in late June, the New York Times story on 'Russian bounties' on US servicemen's heads in Afghanistan has sparked a major political scandal in Washington, with Democratic lawmakers almost immediately introducing legislation to slap sanctions on senior Russian officials and companies. White House officials and intelligence and military officials have pumped the breaks on the allegations, saying that contrary to NYT's reporting, the president had not been informed of the intelligence, and casting doubt on the claims in general.

President Trump himself has accused the newspaper of "making up" the story to "damage" him and the Republicans in an election year.

On Monday, the Taliban reiterated that NYT's claims were "false," and accused the Afghan government's intelligence services of inventing the allegations to try to derail the peace process.

Russian officials, meanwhile, have suggested that some elements in the US intelligence community may have hoped to spread the bounties story to enable the US to keep troops in Afghanistan indefinitely and continue making money off the drug trade and other illegal enterprises.

On Wednesday, Russian Ambassador to the US Anatoly Antonov confirmed that Russian and US officials have remained in "close contact" on the bounty claims, reiterating that Moscow "totally reject[s]" the US media's reporting, and is "not interested in the victory of terrorism in Afghanistan."

Late last week, NYT backpeddled on its claims, admitting that the US "lacks direct evidence" about the bounty claims.

* Designated a terrorist group in Russia.