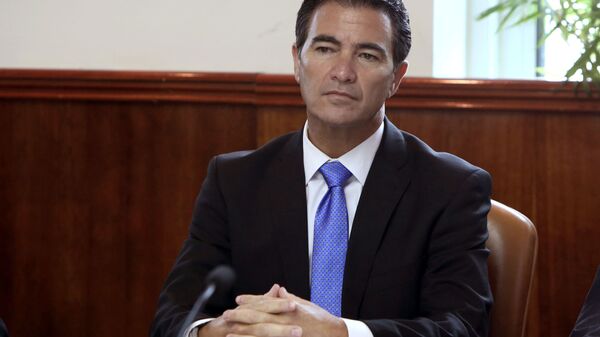 He might be acting in the dark, away from the public eye, but Yossi Cohen, the Jewish state's number one spy, has attracted the public's attention, and when his tenure is over, in June 2021, he might become the top contender to lead the country, Israeli media speculates.

Yossi Cohen, the chief of Israel's spy agency, the Mossad, was supposed to leave his post by the end of this year. But a phone call from Prime Minister Benjamin Netanyahu, asking him to remain in his position till summer 2021, changed this.

The prime minister knows why he had extended such an offer. In recent months, Cohen, who has always been loyal to the PM, has played a pivotal role in advancing Netanyahu's so-called sovereignty plan, aimed at applying the Israeli law to parts of the West Bank, meeting with various Arab leaders in a bid to change their, often hostile, stance on the matter.

Apart from being engaged in advocating for the extension of Israel's sovereignty, he was also at the helm of his agency when it came to the rescue amid the COVID-19 pandemic, assisting in the sphere where others - primarily the health ministry - had failed and providing Israel with medical equipment, hazmat suits and facial masks during a time when other states locked horns over these rare goods.

But reports suggest that Cohen is aiming way higher than "just" remaining Israel's number one spy. Already touted as "the de facto foreign minister", who enjoys the trust of the prime minister, his alleged plans are to succeed the PM as soon as the latter leaves political life.

And it is not only Cohen's own aspirations; Netanyahu sees him as his heir apparent too. A year ago, speaking to a close circle of politicians, the head of government said that it was the Mossad chief (as well as Israel's ambassador to the US Ron Dermer) that he saw as his potential replacement, not any of Likud's current politicians, who are keen on succeeding Netanyahu.

Similar views have also been expressed by one of Blue and White party chief Benny Gantz' top advisors, who also said that Cohen was the most suitable candidate to lead Netanyahu's Likud after his departure, adding that not many could compete with his charm and ruthlessness.

So far, not many former Mossad chiefs have made it into politics. Even fewer have managed to secure for themselves influential positions within the government, but Cohen might be different from them all, primarily because, unlike other spy agency directors, whose activity and operations were mostly hidden from the public eye, the deeds of Cohen are largely advertised, earning him a name and a reputation.

A Man of Big Achievements

The most notable of his achievements was revealed in 2018, when his agency was responsible for stealing of a large number of files detailing Iran's nuclear programme, straight from under the nose of the Islamic Republic.

However, it wasn't his only activity with regards to Iran.

Since 2016, when he was first appointed to the position, Cohen  has carried out a number of operations of paramount importance for the Jewish state. Only a few of them were leaked to the press.

His assistance in the killing of Qasem Suleimani, one of the Islamic Republic's top commanders, was only one of them.

After the assassination of the Quds Force military leader, reports have emerged suggesting that it was the Israeli spy agency that allegedly provided Washington with the information on Suleimani's whereabouts, enabling Pentagon to carry out the deadly strike.

A series of mysterious explosions in Iran that took place in recent weeks have also stirred allegations that it was the Mossad under Cohen that had worked to sabotage the Islamic Republic's nuclear programme, deemed dangerous by the Jewish state for the weapons of mass destruction it allegedly develops - allegations that have been repeatedly refuted by Tehran.

On the diplomatic front, Cohen, known for his ability to convince and charm, was tasked with the tough job of improving Israel's relations with countries that don't maintain official ties with the Jewish state.

The task didn't pose Cohen much of a challenge, as he is fluent in English, French and Arabic. In 2018, for example, it was he who organised Netanyahu's trip to Oman to discuss the threat of Iran and ways to solve the Israeli-Palestinian conflict.

A year later, the master spy was also responsible for setting up the meeting between Netanyahu and the leader of Chad, and sometime later with the President of Sudan, a country that has been hostile to Israel for years and that is now considering a thaw in relations.

And that is just a tip of the iceberg; much more will probably be revealed, when or if the Mossad chief leaves his post to enter the political arena.

However, before making that jump, he will need to go through a so-called cooling-off period, as stipulated by Israeli law.

As Tensions With Iran Rise, Israel Asks Pentagon to Speed Up Aerial Refueler Deliveries
According to legislation that was introduced in the early years of Israel's establishment, journalists, military men and those who have been working for the security forces need to "cool off" for a certain period of time, before transitioning into politics to avoid a situation where their previous position is used for political gains.

While for most people, the cooling-off period stands at a hundred days, for top security officials a period of three years of civilian life is advised before they enter the whirlpool of Israeli politics.

The chief of Mossad is not an exception, unless he finds a way to change that regulation and shorten his trip to the political arena.