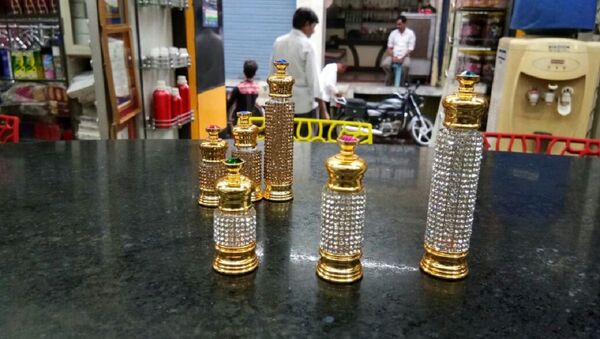 Radhika Parashar
All materialsWrite to the author
New Delhi (Sputnik): Grasse, a medieval town in France, is known as “la capitale mondiale des parfums” meaning the “perfume capital of the world”. Known for its specialty in exquisite Jasmine perfumes, Grasse is known worldwide. India also has its own ancient fragrance-town that is one of world’s largest makers of natural scents.

Located in Uttar Pradesh, the ancient town of Kannauj was once the capital of northern India under the rule of Emperor Harshvardhana from 606 to 647 CE. Today, hidden away from the hustle and bustle of the country's main cities, the city is famous for its natural fragrances called “Attar” in Hindi or “Itr” in Arabic.

For over 5,000 years, perfume makers in Kannauj have been infusing sandalwood, rose, jasmine, shamama, henna and many other natural products to bottle expensive perfumes that are not only sold across India, but also exported to 50 countries, especially in the Middle East.

The most special organic scent manufactured in India’s perfume town is the “petrichor” – the earthy aroma that accompanies rain showers. Depending on the concentration, Kannauj perfumes are priced at between $26 and over $16,500 per kilogram.

A town called #Kannauj in India has been manufacturing organic perfumes or "Attars" for the last 5,000 years or so.

The city is called the "Perfume Capital of India". pic.twitter.com/BFTFHOiu82

​The ancestral perfume makers of Kannauj revealed to Sputnik that over 80 percent of the total population of this small town is associated with the perfume making business. Many of these people are disheartened at the long overdue recognition that India deserves, but is not granted, in the perfume sector.

“Traders here got so carried away with minting money individually that a collective effort to boost India's own town in the area of organic perfumes got left out of the bus. And today, France's Grasse has become the 'perfume capital' of the world," Nishish Tiwari, a perfume maker and seller from Kannauj told Sputnik.

“Despite its rich history, the town has not been in the eyes of the tourists because it has not been highlighted very much. We are doing our work, making organic perfumes and preserving our traditional heritage but the town should be acknowledged more than it is,” Tiwari added.

"Some ancient Indian rituals included the sacrifice of animals, the after smell of which would be very unpleasant. So to eradicate that, our ancerstors here began pouring sacks of flower petals in the fire .. the rest is evolution": #Kannauj perfume makers told @SputnikInt . pic.twitter.com/hqcucOYHAM

​Unlike Grasse where perfumes are manufactured using modern machinery, Kannauj uses the same methods these people's forefathers once used.

Tiwari took Sputnik on a virtual tour of one of Kannauj’s oldest perfumeries, explaining the nuances of creating “magic” in glass bottles.

Making a perfume involves collecting ingredients, extracting oils, blending, aging and quality control. Almost like a fine wine, a lot of work and time go into producing a perfume.

The ancient perfumeries in Kannuj use the “hydro distillation” method to extract the scented scoosh of flowers, wood and soil.

To avoid the rusting of their manufacturing units, perfume makers in the Indian town use nickel-plated copper utensils.

Kilos of flowers are poured in the water kept in these containers.  The system complete with oil-filled condensers is heated on dried cow dung cakes or wood for around four to five hours.

They say, the fragrance of #Kannauj is that of mixed flower petals and mud after rainshowers. @SputnikInt pic.twitter.com/6ZwJJtHmhD

​The vapours from the flower fragrance-induced water are passed into the condenser via a hollow bamboo pipe and the oil in the condenser absorbs the scent. Excess water from the oil is separated using a filtration process. Depending on the quality of the attar, the process could be repeated again and again for up to 30 days.

Here are rose petals, poured in water. Once the container lids are closed the boiling process begins. They use wood or dried cow dung cakes to boil the mixture.

The steam of the flower petals and water are then condensed and infused with oil inside the condenser and that's how this natural Rose Attar is manufactured in #Kannauj. @SputnikInt exclusive. pic.twitter.com/UU0LwdhMms

​For the exotic Mitti Attar (wet soil fragrance), tiny earthen utensils are infused with water instead of flowers.

#MittiAttar is the most special fragrance produced in #Kannauj.

In simple words, its the refreshing subtle earthy fragrance that we sniff after rains! pic.twitter.com/RRsBWuBbm6

After a long, time-consuming process, the fragrances are poured into crystal glass bottles and are ready for sale.

According to another perfume-maker from Kannauj, Ankit Mishra, apart from the usual bulk orders sent to wholesalers, retailers and exporters, only locals from a few surrounding areas know about this “somewhat forgotten” town.

“People from Kanpur and Lucknow cities visit Kannauj , majorly for business purposes but. Majority foreigners who visit here are the ones who have done their research on Indian perfumes. They come here, purchase some bottles, record some videos and leave within a day because they have other places to visit also. Travellers from the Middle East are frequent here,” said Mishra.

The perfume makers have urged the state government authorities to set up an association for their community that could benefit from social media and advertising training.

They believe that although Kannauj perfumes have reached some parts of the world, it’s a shame that the town still remains hidden within India.

“We need a proper body that informs and teaches us about the newer ways of displaying our ancient perfume industries on a global pedestal. Everybody here is just working according to their own basic understanding and we need guidance.  We are nowhere inferior to Grasse, in fact we have a wider variety of organic fragrances that are produced through the year, based on which season favours which flower. Recognition is coming to Kannuj very slowly on a national level especially,” Mishra added.

Ancestral Indian perfume makers invite Indian as well as international tourists to visit #Kannauj and take away with them exotic natural fragrances that would infuse their essences for a long time in those sweaters and scarfs kept away in the closets.@SputnikInt pic.twitter.com/eGQeIevari

According to the latest "India Fragrance Market Outlook' report , the demand for fragrance products has been driven by rising disposable income, the importance of personal grooming, and the growth in the number of women working in India.

The hot, humid and tropical climate conditions of India also plays a vital role in the booming industry.

India's revenue from fragrances is expected to amount to $306.7 million in 2020. The market is expected to grow annually by 5.5 percent by 2023, according to German online statistics portal Statista.